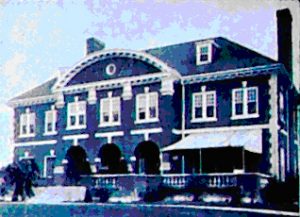 In June 1902, Detroit businessman, William T. Barbour (age 25) married socialite, Margaret B. Chittenden (age 23). At the time of their wedding they had not yet decided where to make their home. But after a short honeymoon trip they rode up what is now Woodward Avenue to visit their friends, the John T. Shaws, in their new suburban home on the west side of Woodward Ave. between Cranbrook Rd. and Long Lake Rd. (Bloomfield Centre). They were so impressed that almost immediately the Barbours purchase a large parcel that was formerly part of the Trowbridge Farm between the Shaw estate (Whysall) and Bloomfield Centre. Then they hired Margaret’s older brother Detroit architect, Alpheus Chittenden, to design their lovely Georgian style house. The house was completed in the fall of 1904. A few years after Barbour build Briar Banks, Margaret and Alpheus Chittenden’s father, William, purchase the 40 acres directly across Woodward Ave. from Briar Banks and built Brae Burn. Later it would become Woodward Hills Nursing Center. 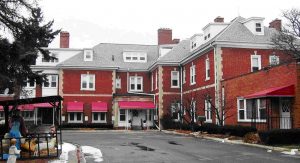 Barbour was the long-time president of the Detroit Stove Works. He also served as a member and director of several other substantial businesses and community organizations. In the late 1920s, he collaborated with Manley Davis (Fox and Hounds Inn) and Edward Butler (Bloomfield Downs) in the commercial development of the intersection of Woodward Ave. and Long Lake Rd. Barbour’s various commercial enterprise were on the southwest corner of the intersection and included the initial Kingsley Inn, an auto service station, post office, chapel, and water tower, and others.

The Briarbank (Lots 1 – 50) and Briarbank No. 1 (Lots 51 – 69) subdivisions were platted by William and Margaret Barbour in 1929 and 1937, respectively. These subdivisions are located around the north end of Vaughan Rd. as it meets Long Lake Rd.

In 1943 the mansion, stable, and various out buildings were sold to the Daughters of Devine Charity along with 13 of the original 220 acres of land. For many years it has been known as St. Elizabeth Briarbank – a Catholic assisted living community for women.