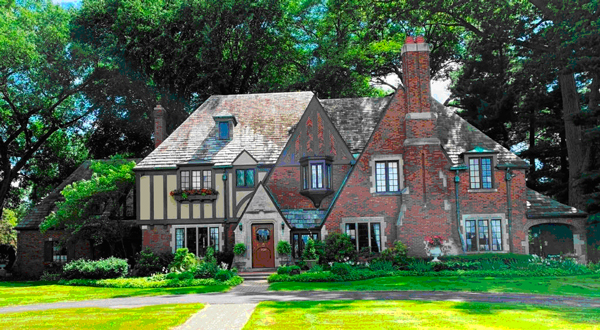 In 1925 the Oakland Hills Country Club Subdivision was platted along the south and west edges of the Oakland Hills Country Club golf course.  Most of it was a narrow strip between the south golf course and Lincoln Rd.  It contained 305 residential building Lots.  The first house was built in 1930 on Lot Nos. 144 & 145.  It still stands unchanged today at 3825 Oakland Drive as an impressive manor house of English Tudor design with a clear view of OHCC Golf course directly across the street.  No other houses were built in the subdivision until after 1940.  Amazingly this grand house has had only TWO owners in its 91 years.

This stately house was built for Albert M. and Ada L. Wibel and their four children ages 2 to 12 years at the time.  The Wibels initially owned nine (9) adjacent lots comprising 3.18 acres – 6 on Oakland Dr. and 3 behind them on Oakhills Dr.  The house was designed by architects F.W.J. Howell and John A. Shocter.  Albert was at the time one of the top vice presidents of the Ford Motor Company responsible for global purchasing.  He had been with Ford for about 18 years.  Unfortunately, in April 1943 Mr. Wibel “locked horns” with the infamous head of Ford “Security”, Harry Bennett, who he had evidences was bypassing the standard Ford purchasing practices to his gain.  Henry Ford sided with Harry Bennet and asked for Wibel’s resignation.   Albert resigned on 28 April 26 1943, less than a month before Edsel Ford’s untimely death.  A couple of months later, Wibel joined the Nash-Kelvinator Corp. as a vice president.

Albert Wibel was one of the officers of Oakland Hills Country Club for a number of years.  He died in 1965 and his wife Ada continued to live in the house until her death in 1977.  The Wibels owned the house for 47 years.  By the time of Ada’s death the Wibel property holdings had grown from 9 to 13 adjacent lots containing a total of 4.3 acres. 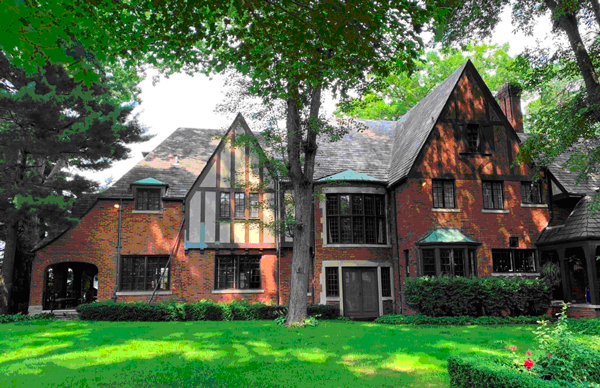 As a teenager in the 1950s, David L. Stanton regularly saw and admired the Wibel Estate which was clearly visible from the course. Shortly after Ada Wibels death in 1977, David and Joan and his wife, Joan, purchased two of the Wibel’s lots (Nos. 144 and 145) on which their house stood for their family of five. The other 11 lots were sold to different individuals in pairs on which six more houses were built in the 1980s. David Stanton was the the President of Aero and Auto Stud Specialists located in Whitmore Lake, MI. David died suddenly in 2016. His wife Joan continues to live in the house. As of July 2021, the Stanton family has owned the house for 44 years, almost as long as the Wibel family.

As evidence by comparing a painting of the house done by the architect, the house looks almost identical today to the way it looked when built in 1930. The only addition to the original structure was made by the Wibels to the 3-car garage to make space for a 4th car. The house still contains the original 5,660 sq. ft. Moreover, the Stantons being only the second owners were meticulous in preserving the original interior décor that was built for the original owners, Albert and Ada Wibel. The house is a perfect example of the way fine houses were built in the early 1930.

By: John F. Marshall,  Member of the Bloomfield Historical Society

History Next Door: Wibel from Bloomfield Township 2 on Vimeo.