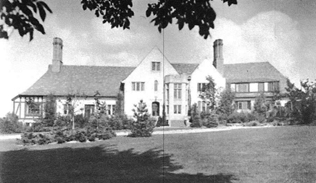 Albert J. Stahelin (b. 1878) was a long time prominent Florist in what is now the Rosedale Park area of metropolitan Detroit. In 1910, at age 32 years, he married Irene Meyer of Bay City (age 22). For the next 20 years they lived in the Stahelin homestead on Grand River Ave. next to the Stahelin greenhouse which was between Evergreen and Southfield Roads. When the business really began to prosper in the mid-1920s, the Stahelins decided to move to Bloomfield Hills. In 1925 they purchase property on the shore of Lower Long Lake between Franklin Rd. and Echo Rd. from Col. Edwin S. George. They hired prominent Detroit architect, George D. Mason, to design a lovely mansion with gatehouse at the reported cost of $250,000. They moved in in 1926. 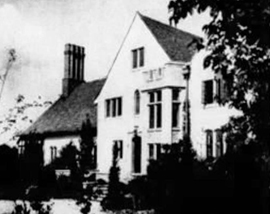 Irene quickly became heavily involved in the social scene the Bloomfield Area. Her name appears many times between 1926 and 1934 in the society section of Detroit Free Press either as hosting or attending some gathering. However, a couple of years later Albert’s florist business fell off dramatically as the Great Depression took hold of the economy. From newspaper articles of the time it appears that neither Irene nor Albert was able to curb spending to fit their reduced income. It was reported that the operating cost of the house was $25,000 per year. After struggling financially for a few years, Albert and Irene separated in 1934. A divorce was granted to Irene in November 1938 in which she was awarded the House and many other benefits.

Irene sold the House in 1939 to L. O. Turner. He and his wife lived in the house for about 10 years. During this time Mrs. Turner was very active in the Bloomfield Hills District Horticultural Society with many other prominent women in the area.