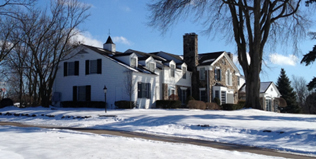 For over 100 years the large parcel (approx. 140 acres) on the northeast corner where Quarton Rd dead ends into Inkster Rd. on the very western edge of Bloomfield Township was a large farm owned by several families. In 1936 Henry Howard Flint (1885 – 1967) and his wife, Eula Bryant Flint (1883 – 1965) purchase the large parcel from Gustavus D. Pope who earlier had built his estate a short distance away at Lone Pine and Franklin Rds. At the time the Flints purchase the property there was an old farm house, a barn and some other out building on fronting on Quarton Rd. By 1938 the H. Howard and Eula had built a substantial estate house near center of the tract with a long and winding drive way through their property that ran from Quarton Rd near the original farmhouse to Inkster Rd across from the east shore of Walnut Lake. This provided access to the new estate house from two directions. The Flints immediately took occupancy of their new country estate house. The 1940 US Census lists the two Flints (in their mid-50s) and two servants (a couple serving as caretaker and maid) as residing there. The two Flint sons Edgar (1912 – 1982) and Robert (1914 – 2005) were by then out on their own – married and starting their own families in the Birmingham – Bloomfield area. Howard and Eula continued to live in their Bloomfield Estate for the next 30 years, until their deaths in 1967 and 1965 respectively.

H. Howard Flint made his wealth in the production and distribution of Ink used in the printing of Newspapers. Flint was a native of Detroit having been born there and attending its schools. After graduating high school, Flint went to work for the Detroit Free Press as a bookkeeper. H. Howard married Eula Bryant in 1908. After a few years with the Free Press he left to work for a chemical company as a traveling salesman. Seven years later he went to work for an ink manufacturing company. The in 1920 H. Howard Flint started his own company making ink for the newspaper business. His first customer was his first employer, the Detroit Free Press. Other prominent newspapers that were customers included: the Wall Street Journal, USA Today, Chicago Tribune and the Detroit News. The Flint Ink Company continued to prosper as a Flint family business for the next 85 year under the leadership of three generations of Flints. In 1939 (the year after building the large estate in Bloomfield Township the top level management positions in Flint Ink were held by H. Howard, Eula, and sons Edgar and Robert. By the time it merged with the German company, XSYS Print Solutions, in 2005 Flint Ink was the second largest producer of ink in the world. The merger that ended Flint Ink as a family owned business occurred a few months after the death from pancreatic cancer of the founder’s grandson, H. Howard Flint II (the then Chairman). He was just 66 years old. 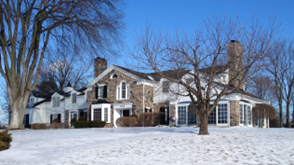 In August 1976 developer Howard Keating, Jr. sold the Flint Estate house to attorney Murray J. Chodak and his wife, Joan. Murray was a local attorney who among other rolls was a partner with James Hoffa, Jr, in the 1980s. The Chodaks owned the Flint House for about 20 years.

The next (and current) owners were Jeffrey P. and Susan B. Bellefleur who bought it in March 1996 and as of this writing in August 2021 have owned it for 25 years.

By: John F. Marshall
Member of the Bloomfield Historical Society