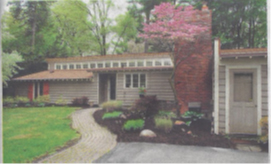 In 1924-1925 Albert (AC) Champion (AC Spark Plug in Flint) acquired a large parcel (13 ½ ac.) of land in the NW ¼ of Section 10 in the NE corner of the intersection of Woodward Avenue and E. Hickory Grove Road. Albert Champion died suddenly in November 1927 while travelling on business in France. His wife, Edna, inherited the estate and, but she died in 1935. Beginning in 1939 the estate was used for the new private Sherwood School. Unfortunately, the mansion (and school) burned down in July 1943.

About that time the property was sold to Clark D. Matthews. Shortly thereafter Matthews sold a tiny 0.68 acre parcel with the old out buildings to Glenn J. (Jack) Frost and his wife, Margaret. The out building that been used as a dog kennel, and by some accounts even a small stable for ponies and finally as a large chicken coop. Jack Frost served for many years as the Art Director for the advertising firm of MacManus, John & Adams. While there, the story is that Jack was responsible for designing the iconic shield / family crest logo for the Cadillac Motor Company.

The small parcel that the Frosts purchased was is “land locked”, being 233 feet north of the E. Hickory Grove Road with access via a narrow easement provided for a shared drive way into their property. The Frosts converted the former chicken coop into a very comfortable home, 177 E. Hickory Grove Rd. A few years after Jack and his wife took up residence in the renovated “chicken coop”, he arranged for Better Homes & Gardens Magazine to feature the house in the July 1955 issue. They lived there until 1985 (42 years). Following the death of Jack’s wife, Margaret, in January 1980, and his retirement, Jack decided to sell the house and move into a retirement facility in Auburn Hills. According to the Hall & Hunter multiple listing sheet, the original asking prices was $100,000. It actually sold on 2 September 1985 for $80,000.

After Jack and Margaret Frost there have been five additional owners of the Chicken Coop House including the present own. All but one had the house for fewer than 5 years. And that one exception, Floyd J. White owned it for 23 years – from 1988 – 2011. Unfortunately, given its landlocked situation it is impossible to see while driving by on East Hickory Grove Rd. The only structural change made over the years to the house was the addition of a detached two-car garage.

By: John F. Marshall
Member of the Bloomfield Historical Society