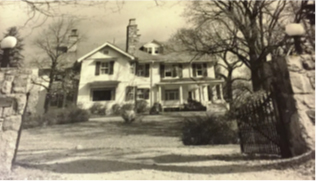 In the Spring/Summer 2010 Issue of Legacy an article on the creation of the large 286 acre farm known first as Tanglewood Farm and then later as Stonycroft appeared. It was written by Bloomfield Historical Society board member, Katie Kiyo. It told the story of this huge estate that was built by Detroit business man, Charles Stinchfield, from the time it was first conceive in 1896 until shortly after his death in 1918. The Stonycroft Estate was formed from three farms around the wedge of land formed by the intersection of Opdyke Rd. and Woodward Ave. 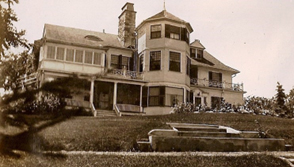 The purpose of this report is to tell the story of Stonycroft AFTER it was sold by the estate of Charles Stinchfield. It will cover the years 1920 through 1960. In 1920 advertising executive Theodore F. MacManus purchased 72 acres of the original Stinchfield 286 acres. Theodore F. MacManus at the time he acquired it was running an advertising agency in Detroit that by 1934 would become MacManus, John and Adams, one of the largest such firms in the United States. Their major client was the Cadillac Automobile Co. 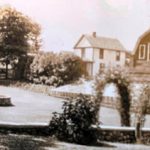 Outside of his world of auto advertising MacManus was a staunch Roman Catholic and quickly became known as one of the “outstanding Roman Catholic Laymen in American”. He published a couple of books on his faith and a number a pamphlets.

Theodore and his wife Alice had six children before they decided to buy the old Stinchfield Estate. In addition to the impressive estate house, the property that MacManus purchased contained many outbuildings including: two large Barns, a very large Greenhouse, a Supervisor’s House, two Tenant Farmer’s houses, a Smoke house, a Windmill, carpentry and blacksmith shops, plus an orchard and large vegetable garden.

A Stone Church was built on the north end of the estate by MacManus in the early 1930s as a memorial to two sons, Hugo and Hubert, who died in 1929 and 1931, respectively, in their 20s (Hugo of scarlet fever, and Hubert of a brain tumor). MacManus insisted that the church be built in “complete conformity with canon law”. The Stone Church is still used by St. Hugo Catholic Church today and was the forerunner of the huge church – school complex that currently stands on the southwest corner of Opdyke Rd and E. Hickory Grove Rd.

In 1928 Theodore used 46 acres of his 72 acres that exists on the east side of Opdyke Rd. to build a nine-hole golf course for his personal use. However, it is noted that he never actually played a regular game of golf on this personal course, but did use it to take walks for exercise. Over the years and through various owners the club and course has become the private Stonycroft Hills Club owned by the members. 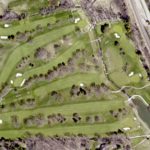 Theodore F. MacManus (Sr.) died in 1940 while in his summer home in Little Current, ONT. He had a very large funeral in St. Hugo Church where his remains are interred in the family crypt at the church. His wife, Alice lived on in the Big House until her death in 1956. Shortly after her death the property was sold. It was owned and rented by several people until it burned down about 1980. One of the most prominent renters was the Williams Family. Mr. Williams worked for the Lincoln-Mercury Division of Ford Motor Company. Their only child, Robin, attended Detroit Country Day School while the family lived in Stonycroft. Robin went on to become the well-known comedian and actor. (See Legacy, Fall 2014 issue for a brief article written after Robin’s untimely death.) The “Big House” was destroyed by fire about 1980. Shortly after that, the land in the Woodward Ave. – Opdyke Rd. triangle was developed into Stoneridge Office Park containing a number of office buildings with the attendant parking structures. 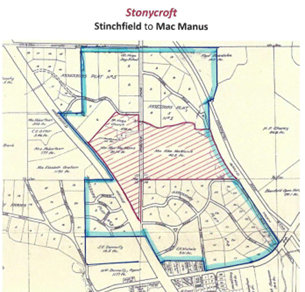