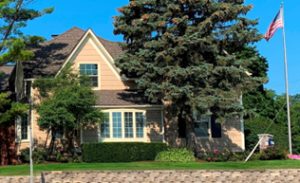 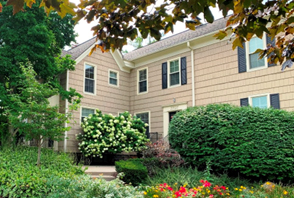 Between 1880 and 1884 John and Julia purchase 187 acres of land in Sections 32, 33, and 34 of Bloomfield Township.  The smallest parcel was in Section 33 on the southwest corner of Maple Ave. and Lahser Rd.  The home where and raised their family may have been  built either by them or by the previous owner just a few years before they bought it.  John was a farmer and also had an orchard.  The 10.5 acres in Section 33 at Lahser Rd. and Maple where their home stood was developed into the W.C. Scott’s Maple-Lasher (sp.) Subdivision of 12 Lots.  The 65 acres in the southeast corner of Section 32 Became what today are Temple Beth El on the west side of Telegraph Rd. and the Glens of Bloomfield Apartment complex east of Telegraph. And the 112 acres in Section 34 on the south west corner of Lahser and 14 Mile Rd. was developed into the Berkshire Forest subdivision with Orchard Ln. and Forest Ln. running through it. – right across 14 Mile Rd. from Berkshire Middle School.

The house that is today at the corner of Maple and Lahser Rd. and is the front of the Gregory J. Schwartz & Co., Inc. office complex is noted in the Township assessors records as having been built in 1930.  If this is correct then it was not the original farmhouse.  However, when examining the sketch of the floor plan of the J.K. Adams Family done for the Rural Property Inventory (RPI) and completed in 1938, it looks almost identical to the foot print in the Sketch on the Assessors Database today.  The RPI data sheet notes that the house was built in 1880 by one of several former short time owners, about 4 years before the J.K. Adams family bought it.  (More research is needed to confirm exactly when this existing building was constructed.)

K. Adams died in 1917 but his wife, Julia, continued in the house at W. Maple and Lahser Rd. for some time but by 1930 had moved to Oakland Ave. in Birmingham. Julia died in 1937, 20 years after her husband. J.K. and Julia and at least seven of their eight children are buried in Section G of Greenwood Cemetery, Birmingham. 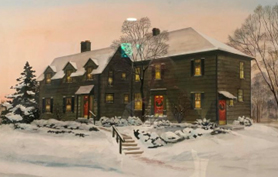 In September 1944 the 10 acre parcel at the corner of W. Maple and Lahser Rd. was purchased by W. Carleton Scott, a local Birmingham – Bloomfield Area real estate developer.  W. C. Scott and his wife, Eleanor, platted the subdivision which they named W.C. Scott’s Maple – Lasher (sp.) of 12 residential building lots.  The Red Maple Lane runs through the subdivision with houses built on either side of it. In 1948 the Scotts built a house for themselves on lot No. 6 that still stands as 6570 Red Maple Lane

I have not discovered who owned and lived at the 19th century Adams Family farmhouse right on the corner in the 1950s and 60s.  I did learn, however, in the tax assessment roll that in 1976 Verne Leonard Hanna owned it as well as Lots 9, 10, 11, 12 and part of 8.  I am not sure that he actually lived in the farmhouse with his wife, Edith and their four children.  V. L. Hanna was V.P. of Finance for the Detroit News.  He died in 1994. 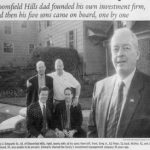 In 1979 the Adam farmhouse was purchased by Gregory J. Schwartz and his wife, Judy.  The Schwartz’s had five sons.  They did not live in the old Adams Farmhouse, but rather had their family home nearby on E. Breckenridge St. immediately to the east of the Brother Rice High School football field.  Several years prior to it being purchased by Gregory Schwartz, the farmhouse had been converted into a duplex and a rented residence.  Upon purchasing the farmhouse Schwartz converted it into office space for his investment management company and had the lot re-zoned as commercial.  In addition to the repurposed farmhouse, a large multi-office addition was constructed on the south side (or rear) of the house, probably about 1985.  By 2006 all five of the Schwartz sons had joined their father in the business.  Gregory J. Schwartz & Co., Inc. still owns and operates out of this impressive office complex today. 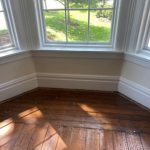 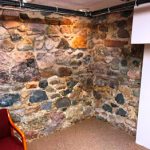 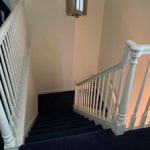 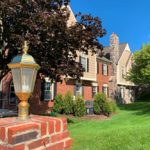