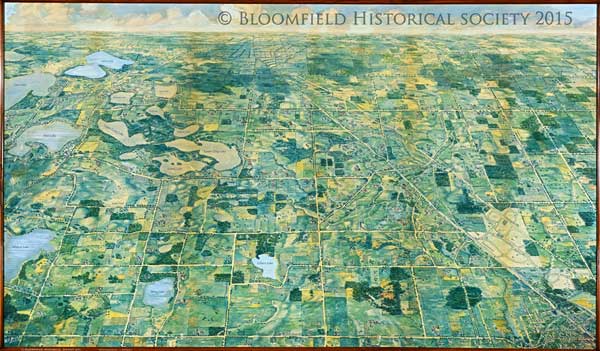 In 1915 developer Judson Bradway commissioned William Bryan, an Akron, Ohio illustrator, to create this portrait of the Bloomfield area. Bradway did so to promote the sale of homesites in his Bloomfield subdivision, Bloomfield Estates, located on the right side of the map. Its curving, tree-lined streets were laid out exactly as he envisioned them – except that this map was the only place they existed until some two years later when they were completed.

The original, which hangs on a wall of the Township auditorium, is what’s called a “Bird’s-Eye-View” (or BEV for short). Traditionally, they showed how a town or city might look from the perspective of a viewer riding in a balloon a few hundred feet in the air (thus the bird’s-eye-view notion.) 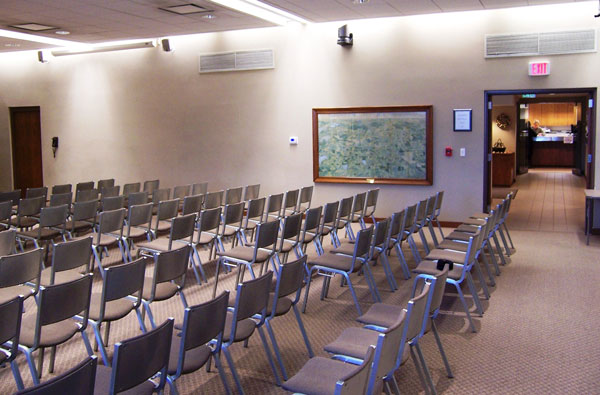 The 1915 Bloomfield area BEV map is a snapshot in time. It’s a six foot by four foot watercolor that shows almost all of Bloomfield Township, including a cluster of commercial buildings that would become Bloomfield Hills and, down in the lower right corner, the burgeoning village of Birmingham. Mainly, it shows a lot of farmland. And orchards. And a lot of lakes. And a few “country estates” such as Cranbrook. Oh, yes, and Bloomfield Estates – the reason for it all.

We added names of many of the lakes and current roads so that you can find your way, but the original doesn’t have them. Once you enter the map page you can zoom in to see how the artist depicted Bloomfield’s hills and valleys, streams and other features. You can see the Interurban tracks of the DUR and the heavy rail of the Grand Trunk line.

Eventually you’ll be able to click on particular points of interest to see more information, including contemporary photos that show how amazingly accurate the map is.

BEV maps were popular in the latter part of the 1800s but had pretty much died out by the early 1900s. The BEV maps were created by a group of specialists who worked with a variety of publishers to pre-sell the maps to prominent residents and other civic boosters. Occasionally the maps also featured vignettes of governmental buildings or homes of prominent citizens. They were, as best we can tell, always black-and-white lithographs so that they could easily be copied. And, they were always of a town or a city that wanted to get bigger. Pontiac, Birmingham and even Detroit all had 19th Century BEV maps produced.

The map hung in Bradway’s office in Detroit and perhaps later in his Birmingham office. Eventually it was rolled up (those hazy yellowish vertical streaks you see are a result of that), donated by his family after his death and put into a closet in 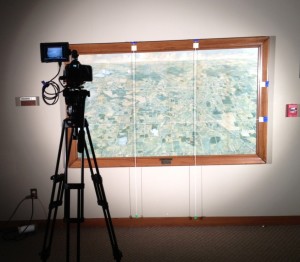 the Township offices. It was eventually brought out and mounted on the wall of the Township auditorium in the ‘70s and refurbished by the United Homeowners’ Association in the ‘90s. That’s where it is today.

There are some wear marks that show up as white streaks, the colors of the original have faded – especially the blues – and we still have some questions about details. Based on his professional photographer’s eye, Larry Trinkaus estimates that the map was painted to be viewed as Bloomfield would have been at around 4:30 in the afternoon of a June day in 1915. He bases that on the shadows as well as the amount and type of vegetation. “Bryan was a true artist,” Trinkaus says. “You can see different colors in the trees, the shadows change color depending on where the buildings are from the base perspective. The hills and valleys are carefully delineated. It’s a unique work of art.

Attempts to photograph it have been thwarted by the amount of light bouncing off the protective glass – until Bloomfield Historical Board member Lawrence Trinkaus, a commercial Director of Photography, figured out a way to divide the map into virtual segments, photograph them separately to maintain focus and depth of field, then stitch them back together digitally. The photography itself required that Trinkaus work in the Township auditorium at night with all of the lights (except for carefully controlled photographic ones) turned off. This required a search for the circuit breaker that controlled the emergency lighting that threatened to derail the project. 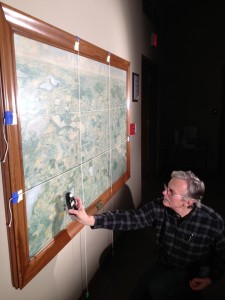 With a sensitive light meter, a series of strings delineating the nine segments and a strip of blue painters tape indicating the correct distance from the painting – and an ultra-high-resolution camera normally used for shooting network television programs such as The Henry Ford’s Innovation Nation – Trinkaus was able to capture the images and then stitch them together seamlessly.

The resultant file of more than a gigabyte was then reduced to a manageable size, feature names were added and the image then brought into a program called Zoomify which facilitates the user’s ability to zoom in on the smallest detail. BHS webmaster Dave Eicher handled the necessary programming to make it happen. Eventually we will be able to add additional features but for now just be amazed at how much detail has been put into the image.

We’re still under construction and will be adding additional content.  Please check back later to see what’s been added.