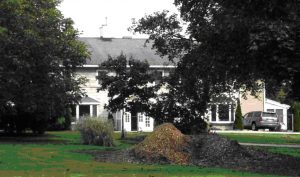 Gustavus Debrille Pope was born in 1873 and raised in Fort Stockton, TX.  After working in Chicago for a few years he married Mary Soper and moved to Detroit in 1904.  A few years later he and Mary bought several separate parcels of farm and orchard land at the northeast corner of Franklin Rd. and Lone Pine and combined them into a single 140 acre farm that also contained Sodon Lake.  The Popes named their property, Apple Lane Farm.  In 1912 they build their large estate house, garage, several barns and out buildings, plus four tenant houses.  The property, along Lone Pine Rd., also included the historic Craig Family Log Cabin that was built about 1840.

The Popes spent all summer and even parts of the other seasons on their Bloomfield farm.  At least in the earlier years, they maintained a city house was on Iroquois Ave. in Detroit.  The 1920 US Census shows that there were 11 individuals living at Apple lane Farm: Gustavus and Mary, Gustavus’ sister Mary, two sons, a daughter, four maids, and a companion.  At the start of the Great War (WWI) Gustavus ceased his business operations and became the Chairman of the Detroit Chapter of the Red Cross, where he served for many years. Among other ways that Pope served the Detroit and Bloomfield area community were: Commissioner of Detroit’s Health Department, President of the National Rifle Association, and trustee of the Cranbrook Foundation and various other boards at the Cranbrook Educational Community. 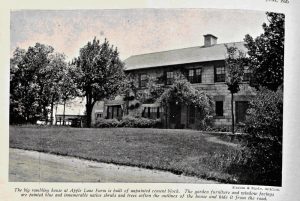 Gustavus was an avid big game hunter and displayed a number of his trophies on the walls of Apple Lane Farm estate house.  In 1927 he improved the then 85 year old historic Craig Log Cabin into a very livable dwelling by: attaching a lean-to with kitchen and bath, added a small furnace, and installing pine paneling on the interior walls.  Pope rented the Cabin to two or three families until his death in 1952 at age 79.

When Gustavus died his large estate was subdivided into the Bloomfield Heights subdivisions by the Franklin Lone Pine Road Co.  The Apple Lane Farm estate house still stands proudly on 2.8 acres in Bloomfield Heights No. 3.  The Gate House and some of the out buildings still exist on other lots in the subdivision.

The June 1926 issue of The Afterglow magazine has an excellent article on Apple Lane Farm with several photographs of both exterior and interior.