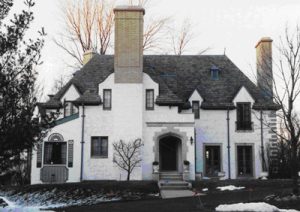 In 1927 Clarence E. and Phoebe Otter purchased 3.5 acre out of the middle of the 14.8 acre orchard that Flora M. Robertson owned on the west side of Woodward Ave. just south of Hickory Grove Rd. Clarence was associated for most of his working career with the prestigious Hamilton Funeral Home on Cass Ave in Detroit, ending his career as the chairman. Shortly after acquiring orchard property Clarence hired friend H. Augustus O’Dell to design and construct a country French style home for him from a photograph of a home he had brought back from his service in France during WWI. He and Phoebe named their estate Apple Tower. Among other position, Clarence was the president of the Automobile Club of Michigan. He also served continuously on the Bloomfield Hills City Commission from its incorporation in 1932 until 1954. The Otters had three daughters: Doris, Phoebe and Jean. When Flora Robertson died in 1950 Clarence and Phoebe were the trustees of her estate. In her will Flora bequeathed her orchard estate (10.8 acres) to the three Otter sisters. Clarence died in 1973. In 1978 the Otter sisters subdivided the property into the Knolls of Bloomfield containing 11 lots. The Otter’s driveway was designated as Balfour Drive around which the 11 lots are located. Apple Tower (the house) is located on lot No. 9. The Otter family owned Apple Tower for 51 years. 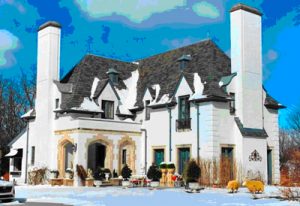 The next major owners were Richard and Florentine (Urban) Van Tiem. They bought Apple Tower in 1983. Florentine was prominent in the advertising business community. She was the principal in the development of several local businesses including a Spa in Metamora. She was also the developer of SunBran Bread in the early 1960s made with Kellogg’s All-Bran cereal. Florentine was instrumental in getting her client, Avis Car Rental Co., into major airports around the country. The Van Tiem’s sold Apple Tower after 11 years in 1993 to the Duncans.

Cameron Duncan was a principal in Deloitte and Touche. He and his wife, Rosanne, were prominent patrons of the Arts in the Detroit area. Cameron (Sandy) was president of Concerned Citizens for the Arts in Michigan and he was also in the 1990s the president of the Detroit Thanksgiving Day Parade. Rosanne had a business doing interior design for individual and also some restaurants. At some point she actually ran her design business, Rosanne Designs, out of Apple Tower. The Duncans sold their place in 2015 after owning it for over 20 ears.