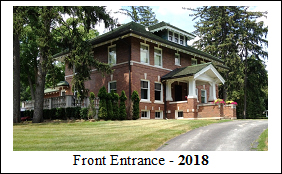 In 1912 Judson Bradway registered the plat map for the Bloomfield Highland Subdivision with its 59 residential lots. This was almost certainly his earliest of Bradway’s developments in the Bloomfield Area. It preceded Bloomfield Estates and Trowbridge Farms by at least 3 years. It is located off the west side of Woodward Avenue less than one quarter of a mile north of Square Lake Rd. and is traversed by North and South Berkshire Roads. This was formerly the 102 acre J.C. Kimble & Sons farm. For the first time in the 43 years I have lived here I drove into this subdivision in July. I was surprised to see a 4 or 5 homes that appeared to have been built in the 1920s. The one on Lot No. 46 in particular caught my attention. It is at the point not far off Woodward where North and South Berkshire converge. The house is a substantial brick American Foursquare style house with overhanging eaves all around. Complementing the house are two red brick out-buildings that are of the same style as the main house. I was really curious about its history.

I discovered that the house was built in 1918 by a Meados J. Beaudette and was only the third or fourth house built in the subdivision. The lot was original bought by a Virena M. Palmer in 1913 and sold to Meados in 1918 shortly after Virena married Meados’ nephew, Oliver L. Beaudette. Meados was a member of the Beaudette family that owned O.J. Beaudette & Company Body Works which in the late 19th century made carriages and then switched to bodies for Ford Model T cars. He and his wife, Josephine, sold the house in 1926 when he was about 65 years old and moved to California. 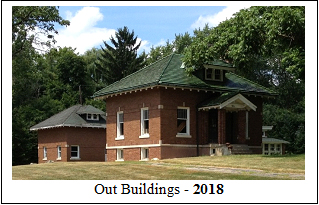 The second owners were William J. LeMessurier and his wife, Bertha. William was the manager and part owner of the Le Messurier (a.k.a. La Measure) Bros. Laundry Company founded in 1897 in Detroit. They bought the house in 1926, the same year that their fourth child, William, Jr. was born. William, Sr. died at age 64 from the complications following an automobile accident that occurred on Woodward Ave. at the entrance to the subdivision. Youngest son William, Jr. (“Bill”) graduated from Cranbrook in1944 and went on to Harvard and MIT, becoming a prominent American structural engineer. One of his major projects was the Citicorp headquarters tower in N.Y. City.

After Bill Le Messurier graduated, Bertha sold the property. There have been five (5) subsequent owners. One of these, H.W. Winstanley, owned the property for 28 years. The current owners have the property in excellent condition that is really a treat to see when one drives into the subdivision.