A Brief Overview of the History of the Bloomfield Area

Geology
The beautiful topology of Bloomfield Township was formed by the action of various massive glaciers that encroached the area; the latest of which receded about 15,000 years ago. This glacial activity resulted in the hills, small lakes, large boulders and the source of The Rouge River with its tributaries. Most of the lakes are on the west side of the township and the northern areas are more hilly (moraines) than the southern area. There is considerable evidence of the work of the glaciers through out the township.

Early Human Habitation
Very little is known of the earliest people to live in this area as no written or oral history exist to draw from. What is know is pieced together from archeological evidence. 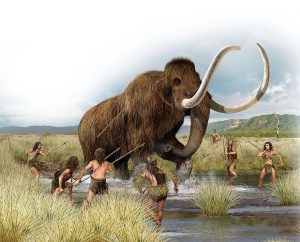 Paleo-Indians, 10,000 B.C. – 8000 B.C.
The first people to arrive in Michigan after the Ice Age glaciers receded were Paleo-Indians that migrated from the south sometime around 10,000 B.C. They were hunter-gathers that lived in small mobile groups hunting large mammals probably including mammoths and mastodons using spears fitted with fluted stone points. In 1950 the remains of a mastodon were discovered in the township in the pond on Charing Cross Rd. between Woodward Ave. and Kensington Rd. 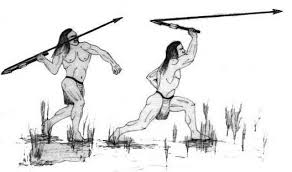 Atlatl for throwing a spear

Archaic-Indians, 8000 B.C. to 1000 B.C.
Over time as the climate conditions warmed, the environment gradually changed. Hardwood forests started to appear and with them a wider range of game to hunt. There was a refinement of hunting tools and the atlatl came into use allowing a hunter to double the distance a spear could be thrown.

As the vegetation continued to change, by the middle of this period it became possible for people to gather nuts, fruits, and berries for food along with hunting and fishing. Stone tools were refined and people started to settle in small villages. With a more stable food supply toward the end of this period, villages became larger and more stable. There was an increase in art and decorative adornments. Copper was mined and made into implements. Extensive trade with other groups became a way of life. 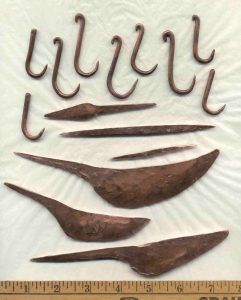 The Early Woodland Period (1000 B.C. to 300 B.C.)
A longer growing period gave rise to the cultivation of squash and sunflowers. Ceramic pots were made to store food. Trade continued to increase and in 300 B.C. corn was introduced to the region.

The Middle Woodland Period- (Hopewell) (300 B.C. – 500 A.D.)  During this period the mound builders known as Hopewell became widespread in southern Michigan, bringing their culture which included the building of burial mounds. 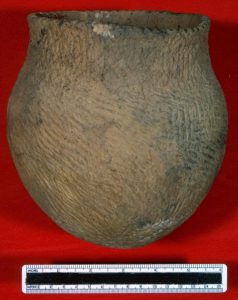 The Late Woodland Period – (1000 A.D. to 1620)
As the Hopewell culture diminished the cultural patterns of the People of The Three Fires (Ottawa, Potawatomi and Ojibway) became firmly established.  According to their own oral tradition they journeyed many years ago from lands on the Atlantic seaboard to the Great Lakes area. It was these various bands of Native Americans that loosely shared the same Algonquin dialect that the first European explorers traders and settlers encountered when they first came to Michigan. Some lived in large villages and grew corn, beans, squash, and sunflowers on their nearby fields. They supplemented what they grew by hunting and fishing and gathering wild plants. Their homes were built of saplings, bark and rush mats.

In 1807, the Governor of the Territory of Michigan, William Hull, negotiated the Treaty of Detroit with the Ottawa, Chippewa, Wyandot, and Potawatomi Indians under which they agreed to cede to the US Government a tract of land comprising of roughly the southeast corner of the lower peninsula for monetary and other compensations. With a treaty in place the the US Government could now offer land for sale to settlers who wished to come to Michigan.

But before the land could be put up for sale it had to be surveyed. The surveyors began their work in 1815 to create townships by establishing a base line and a meridian line. All land surveyed in Michigan start from these reference lines. Thus “T2N, R10E” means the second township north of the base line and the tenth township East of the Meridian. The townships would be six by six miles square containing 36 sections. The sections within would be numbered starting with #1 in the north east corner. 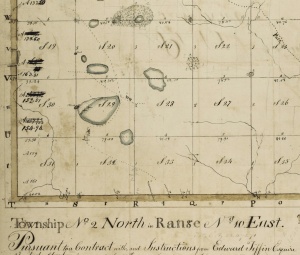 In 1818 the government land office was opened in Detroit right after the initial land survey. Therefore, the earliest land purchases in the Bloomfield area are recorded as 1818 with most of the land purchased during the 1820’s. Much of the land was purchased by families coming from western New York State and other areas on the East Coast. A few parcels were purchased by immigrants coming to Michigan directly from England or Ireland. The amount of land purchased by each settler was almost always at least 40 acres, but parcels of 80 and even 160 acres (a quarter section (1/2 mile by ½ mile) were popular. A few even larger parcels were purchased. 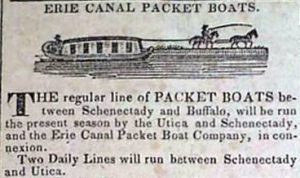 The Pioneer families generally arrived by way of the water route over Lake Erie by steamship having arrived in Buffalo, NY via the Erie Canal which was first in use in 1821. New comers would land in Detroit or sometimes travel by water up to the mouth of the Clinton River. They would usually travel on foot or by wagon to what is now Birmingham in the very Southeast corner of Bloomfield Township and then locate the property they had purchased by finding the appropriate stakes that the surveyors had previously set on the corners of the sections. Once they had found their parcel of land, they would select a spot that seemed to be the most suitable for a dwelling and quite often construct first a temporary log structure from trees felled on their land. They would clear some of the land and plant their first crops. A few years later the log structure was either replaced by, or incorporated into, a frame house built from lumber milled by the early water powered saw mills which were the earliest mills built. Later grist mills came into being to grind the grain that was grown. Some of these became cider mills since much of the land was used for orchard crops. 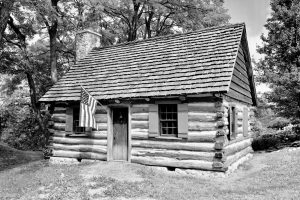 Roads were almost non-existent in the township when the first settlers arrived. There were a number of paths used by Native Americans. (These were even noted on the 1817 survey maps.) The most prominent of these in the Bloomfield area roughly followed the route of today’s Woodward Avenue (Saginaw Trail). However, it was initially not at all suitable for even wagon travel.

During the early days of settlement roadways evolved that for the most part follow along the lines that were delineated by the surveyors marking out the boundaries of the one square mile sections. A few roads, however, evolved a bit differently by following a wagon path made by a farmer from his property to the nearest settlement. One prime example of this is what today is known as Vaughan Rd. that runs on a southwest to northeast diagonal from the farm of Abraham Vaughan to what was originally named Bloomfield Centre at Long Lake and Woodward Ave.

In 1827 Bloomfield Township as a governmental entity was officially chartered as one of 25 town-ships that comprise Oakland County. A Railroad line was run from Detroit through Royal Oak arriv-ing at Birmingham in 1838. This was very early in the history of railroad service. The line was continued from Birmingham going to the northwest and arriving at Pontiac in 1842. This was a real boon to the farmers in the Township, making it much easier to get their products to Detroit and Pontiac. From Royal Oak to Birmingham the railroad was built along the east side of the Saginaw trail. From Bloomfield Centre it was positioned about ¾ of a mile to the east along what was Ball Line (now Kensington) Road. 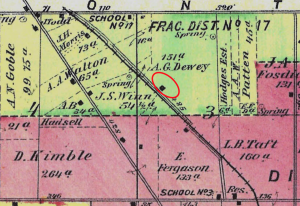 Like other surrounding townships, Bloomfield Township was a growing farm community during this time. The size of the farms would vary but looking at the 1850 products of agriculture forms, an aver-age Bloomfield Township farm would have; 3 Horses, 4 Milch Cows, 2 working Oxen, 40 Sheep, 4 Swine, and 4 Other Cattle. They would on average produce about 100 bushels of wheat, 200 bushels of Indian Corn, 200 bushels of Oats, 100 lbs. of Wool, 75 lbs. Irish Potatoes, 40 bushels of Buckwheat, 200 lbs. Butter, 25 tons of Hay, and $30 in Orchard products. 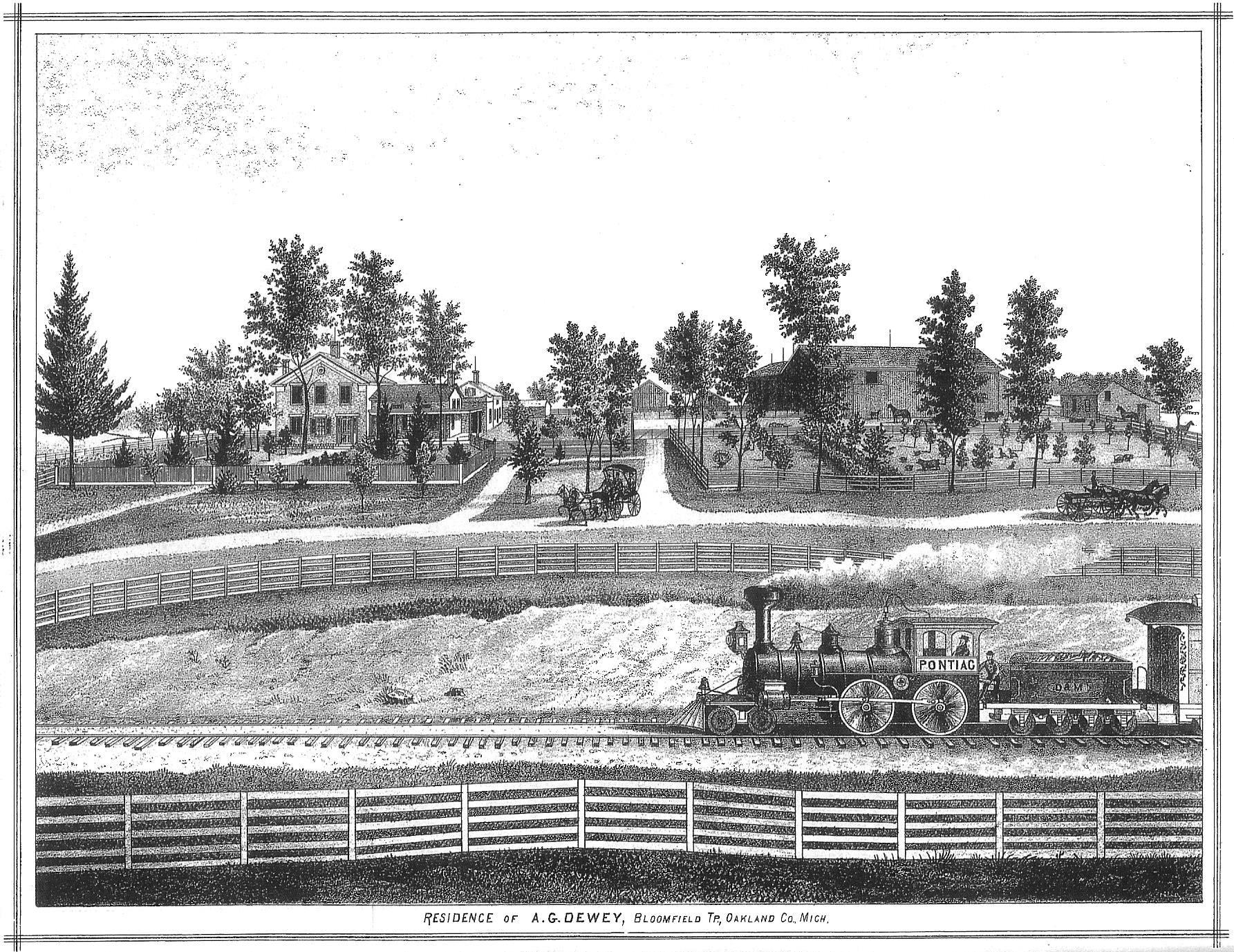 Residence of A.G. Dewey, Bloomfield Twp. from the 1877 History of Oakland County, MI 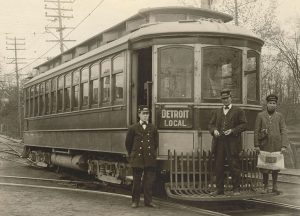 At the very end of the 19th Century an additional rail road line was constructed to service many areas in Southeast Michigan. It was an electric rail service designed primarily for passenger service. One of the main branches of this interurban ran along Woodward Avenue (the former Saginaw Trail) from Detroit through Birmingham to Pontiac. This made it quite convenient for successful business people in Detroit to establish residences in the “hills of Bloomfield” and still commute daily to their businesses. Many large country estate homes were built along Woodward Avenue in Birmingham and Bloomfield Center between 1895 an 1915. 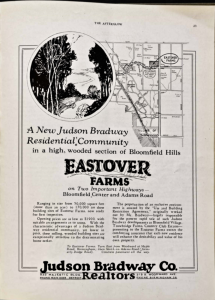 With the increased popularity of the automobile and the improvements in roads starting in the early years of the 20th century it became increasingly popular for people to make their family homes in the suburbs and especially the Bloomfield area. Developers and even individual estate owners felt that they could make a profit by buying up farms and platting them into residential subdivisions. By the late 1920’s the supply of building lots in the many platted subdivision far exceeded the demand for new houses. Many subdivisions with dozens of available lots had only a couple of houses built on them. Due to the Great Depression following the stock market crash in October 1929 and the economic effects of World War II, very little residential development occurred between 1930 and 1945. But the 1950’s and 1960s saw a real boom in residential home building.

Today Bloomfield Township is a modern residential community. As of the 2010 census the township population was 41,070 with 16,381 households. The only farm left in the township is the Bowers School Farm owned by Bloomfield Hills Schools. With almost no available land left, new homes are mostly built by purchasing property with older homes, tearing them down and building on the avail-able land. Founded in 1827, Bloomfield Township is the oldest township in Oakland County and is fortunate to have many historic homes built during it’s long history survive among the rolling hills, lakes and wooded landscape.

By John Marshall and Lawrence Trinkaus

Bloomfield Township as a governmental entity wasn’t officially chartered until 1827 as one of 25 townships that comprise Oakland County. It was defined to be 36 square miles, (6×6 miles) bounded by South Boulevard on the north, 14 Mile Road on the south, Adams Road on the east, and a combi-nation of Inkster Road and Middlebelt Road on the west. Over time a few small portions of the town-ship have been carved out or annexed. Sometime in the early to mid 1920’s the City of Pontiac an-nexed 2 Sq. miles of the township on the north boundary. In 1932, five square miles in the center of the township was carved out to form the City of Bloomfield Hills and in 1933 the city of Birmingham was incorporated in the southeastern corner. These actions left the township with two major US Post Offices that service all the residents of the area. Some residents have a Birmingham address and others a Bloomfield Hills address. Also, there are four school districts servicing the area – Birmingham, Bloomfield Hills, Avondale, and Pontiac. This is what led to the various descriptions of where I live. 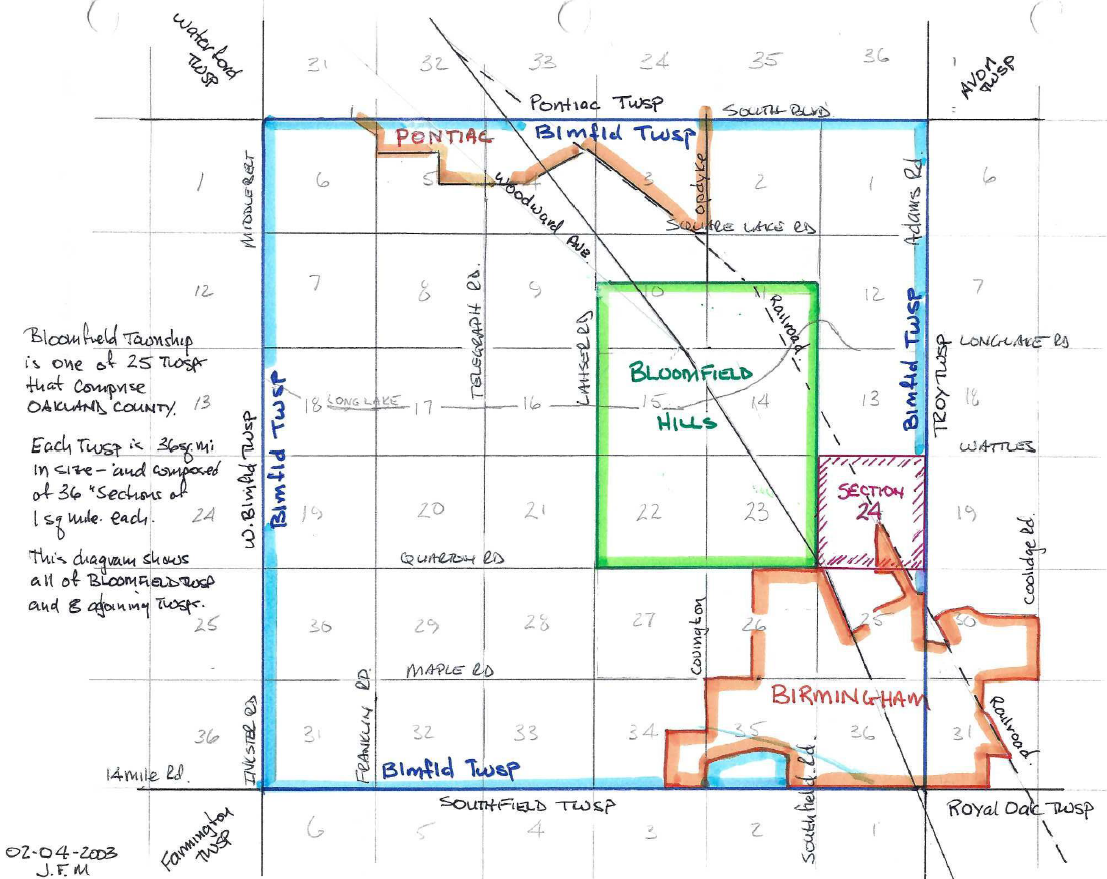