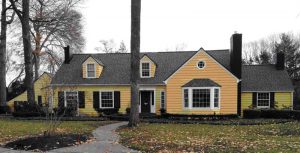 In 1923 Roger and Mary Stone (Stone was chairman of Security Trust Co.) had an Albert Kahn designed house, Stonelea, built for them on N. Cranbrook Rd. near Woodward Ave. In 1936 they sold this house to William and Kathleen Belknap. The Stones lived in Detroit for a short time, but in 1938 contacted their good friend, architect H. Augustus O’Dell, and asked him to design and build a new house for them. What they had in mind was a house that they had seen in the May 1937 issue of Better Homes and Gardens (BH&G) magazine, cut out and carried with them. In 1938 they sent the picture to O’Dell and asked him to design a slightly modified (reverse) plan of the house, on a double lot that they had purchased on Chesterfield Ave. in the new Quarton Lake Estates subdivision in Birmingham. O’Dell accepted the commission for which the Stones paid $14,000 in advance. The house was completed in about four months while the Stones wintered in Florida. The Stones returned to their new finished house in spring 1939, never having seen it during construction. They were delighted with the result and lived there until 1944.

The O’Dells and Stones were so proud of this project that O’Dell’s wife, Agnes, wrote a very detailed article about the features of the house and the trust that existed between the owners and the architect. The article contained several photographs including Roger and Mary Stone themselves inside and outside, as well as basic dimensioned floor plan drawings of the two stories. The article was published in the October 1939 issue of BH&G magazine and, along with the original O’Dell drawings, adds a great deal to the Current Owner’s appreciation of the history of their historic house. 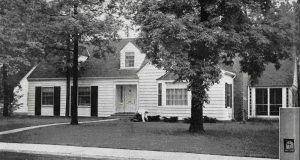 In 1944 the Stones sold their house to Floyd and Melita Rice. Rice was a prosperous auto dealer with a Ford dealership on Livernois Rd, in Detroit. His advertising slogan was: Get a better car at a lower Price, Think Twice – See Floyd Rice. In 1949 Floyd and Melita Rice sold the house to Lawrence and Carabel Ball. They were followed by three other owners before the current owners, Patrick and Claudia Duerr, purchased the property in 1980.

In the 39 years that the Duerrs have owned the house they have carefully preserved its original features while making a number of improvements and some additions. However, most of the structural changes have been made to the rear of the house. If the O’Dells and the Stones were to drive by today they would immediately recognize the house built in 1939 from the front elevation. When the Duerrs acquired the house they had the exterior painted yellow with contrasting dark shutters. This continues to make the house very recognizable on the east side of Chesterfield for anyone driving past.