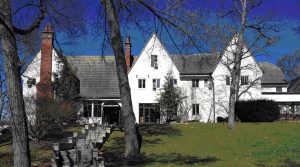 Coventry Crest (a.k.a. Hill House) stands prominently on top of a high hill on the east side of Woodward Ave. between Long Lake Rd. and Hickory Grove Rd. It has held that position for 90 year. It may be the only Bloomfield estate house from the 1920s that has had only two owners.

The original owner was Alfred Stephens and his wife, Zillah. The house was designed by architect Alva M. Hull with construction starting in 1927 and completed in 1929. The house is sited on 4.31 acre Lot No. 8 in the Assessor’s Plat No. 5 in the Village of Bloomfield Hills. It is built of special pressed steel framing and concrete. Mr. Stephens was deathly afraid of fire. He lost a stable with 60 horses earlier as well as a one of his factories in Grand Ledge in huge fires.

When constructed the house was virtually fire proof. It contained 20 rooms, had a marble wall of built in refrigerators, made extensive use of tile produced by Pewabic throughout, had a large attached greenhouse, a detached garage/carriage house with a gas pump, and a large concrete pond on the property in which one could fish. 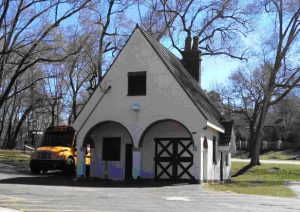 Stephens was the founder and head of the Arctic Ice Cream Company in Detroit. He was also a financial partner with Judson Bradway in the development of the huge Bloomfield Village Subdivision located just west of Birmingham. Stephens held the mortgage on much of the land for the subdivision which Bradway was to pay off as he sold the lots. It took Bradway until 1949 (over 20 years) to make the last mortgage payment to Zillah two years after the death of Alfred.

In 1946 the second and current owner acquired Coventry Crest and added another 9 acres to the original 4.3 acres. After making renovation, Roeper School opened its doors to students in the fall of 1946. The school has been operating for the past 73 years. The house is now called Hill House and is the Administrative Center for the Roeper Schools two campuses. (See Legacy, the newsletter of the Bloomfield Historical Society, Vol. 10, issue 1, for more information.)