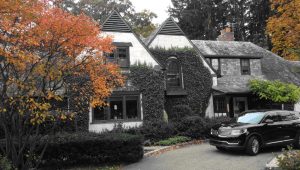 Louis Kahn (1885 – 1945) was the youngest brother of famous Detroit architect, Albert Kahn, and the president of Albert Kahn Associates. In 1925 Louis decided to build a summer home in the country. He and wife, Beryl, chose a 23 acre parcel on the east edge of the historic Franklin Village within walking distance of the popular Franklin Cider Mill.

On the very south end of the parcel, Louis built a fine English Cotswold Cottage which he and his brother Albert designed. Kahn’s house was approached via a quarter mile tree lined lane from 14 Mile Rd. The Kahn’s named their estate Cressbrook. Kahn Family tradition says that Louis’ wife Beryl loved the house and the 23 acre estate so much that she told Louis that she wanted to make this Franklin house their permanent home and left their Detroit home. The Louis Kahn Family has owned the house ever since.

The estate contained many features in its early days: the main House, a log cabin with an outdoor grill, a caretaker’s house, a five-car garage, a stable, an orchard along the lane, extensive vegetable garden, a large swimming pool, a pergola, and a foot bridge across the Franklin branch of the Rouge River on a path into Franklin Village.

Louis died in 1945. A few years later his widow, Beryl, married again and lived in the main house. She and her second husband, Louis Savage, later moved to a new house they built on the property, and son William and his wife, Ellen, then occupied the main house. In 2000 neighbor, developer Paul Robertson created the design of a 21 unit condominium complex that they named Cressbrook after the estate on which it is built. Following a couple of years working with the Franklin Planning Commission, the new units were completed in 2003. The main Cressbrook Cotswold Cottage has been beautifully incorporated into the design of the complex. This house has never been owned by anyone other than the Kahn family.