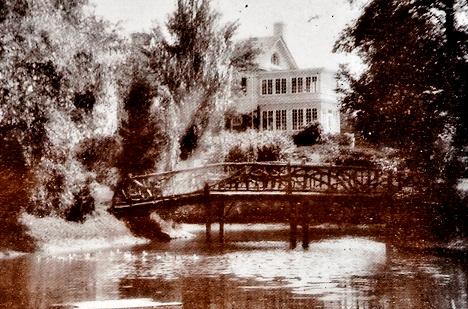 One of the oldest and grandest houses along Kensington Road just north of Big Beaver is Eastover. It was built in 1910 by Traveler’s Insurance executive Walter Thompson. Walter and his wife Marjorie (Calkins) had three children: Barbara, John and Jane. Jane, the youngest, was born the year after the house was built.

In addition to the grand house on a hill midway between Adams Road and Kensington Road the Thompsons built stables and a studio for Marjorie to practice her painting.  The 25-acre estate was named Eastover because it was located east over Woodward from Birmingham. Years later, Walter gave the developer Judson Bradway permission to use the name Eastover for a large subdivision he developed along both side of Long Lake Road between Adams and Squirrel roads. It is also the name of the elementary school on Westview Road just west of Adams.

The Thompsons did not live long at Eastover. Marjorie suffered from tuberculosis and sought better climate conditions for several winters by vacationing in the southwest.  In 1921 Thompson sold Eastover to Douglas Davis and moved to Pasadena, CA. Unfortunately Marjorie died a couple of years later at age 42 from TB. Walter moved back to the Bloomfield area with the children and remarried.  There have been 12 owners of Eastover since the Thompsons.

Starting in 1953 large chunks of the estate were sold to form three small subdivisions: Hickory Hollow, Bloomfield Adams Manor and Glouchester Square. In addition a 4-acre portion on Adams Road was sold to Pilgrim Congregational Church in about 1968.  The Eastover Estate House still stands proudly on three lots totaling 1.85 acres. It almost was demolished in 1977 when it had fallen into disrepair but it was saved and restored by Thomas and Gail Gossett who lived there until 2000.

John Marshall is a historian and member of the Bloomfield Historical Society.