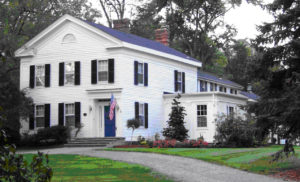 In September 1822 thirty year old Samuel Satterlee purchased 160 acres in the southwest corner what is today the intersection of Adams Road and Long Lake Road. He travelled to Michigan with his wife Susan (age 24) and infant son, George (age 2 years). They became one of the earliest pioneer families to settle in Bloomfield Township. Through 3 generations for 122 years, the Satterlee family owned the original homestead.

After arriving in Michigan and settling on their farm, Samuel and Sarah had four more children. The Satterlees initially lived in a modest frame farm house. About 1840 Samuel built the much larger and lovely Greek Revival Farmhouse. Susan died in 1848 and Samuel in 1849. Sons George and William inherited the farm. William received the north portion containing the beautiful classical Greek revival style homestead. After George’s early death in 1874 his widow deeded her parcel back to William, making the farm whole again. William and Caroline had four children – three sons and one daughter, Mary.

When William died in 1907, Mary inherited the Satterlee Farm. In 1925 Mary joined with a couple of neighbors in platting the property into Eastover Farms No. 1 Subdivision. She retained Lot Nos. 64 and 65 on which the Satterlee farmhouse still stands at the corner of Adams Rd. and the new Satterlee Rd.

Twenty years later in 1945, Mary Satterlee (then 81 years old) sold the historic century-old family farmhouse to William Stubbs James and his wife, Rose. Stubbs had moved to Detroit from South Bend in 1945 to become the Director of Research for the Ford Motor Company. It is believed that while living at Five Oaks, William James acquired the marble fireplace hearths and mantles from the executive offices of Henry and Edsel Ford in Dearborn and installed them in the living and dining rooms his house. James died in February 1964 at age 71 years.

Just a few months later in May 1964 Rose sold the property to William J. Hamilton, Jr. and his wife, Janet. The Hamiltons owned Five Oaks for only 13 year.

Dr. Robert C. Belf and his wife Shirley (Lee) Milroy did not hesitate to purchase Five Oaks when it came on the market in 1977. Both grew up in the Detroit area. Robert was a surgeon at Pontiac Osteopathic Hospital and an ear, nose, and throat specialist with a private practice in Bloomfield Hills. The Belfs have taken great care in restoring the grand Satterlee farmhouse attempting to keep it true to its pre-Civil War Greek Revival origins. Dr. Belf and Lee raised their four children in the big farmhouse. Dr. Belf died in 1998 at age 67 years. Lee continues to live in and care for Five Oaks.