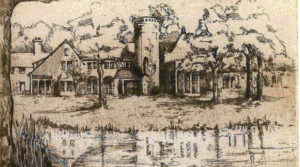 In 1918 George E. Edmunds (b. 1878) and his wife, Margaret (b. 1885) purchased 18.3 acres on Lone Pine Road adjacent on the west to what is now High Gate, the estate of the Polk Family. According to the records of the assessing department of the City of Bloomfield Hills, the Edmunds’ house at 350 Lowell Court was built in 1924. It is a French Norman Tudor style containing: 7,800 sq. feet; 5 Bedrooms; and 6 full Bathrooms. The Edmunds had two children Esther and Paul. Both show up in the 1920 census as living with their parents on Kirby Ave. E. in Detroit. George was the owner of the Edmunds – Jones Co., maker of headlights for Ford cars. The Edmunds called their estate Bryn Glyn Llyn, which is Welch for “the house in the Country”. But today the stone pillars at the entrance off Lowell Ct. today identify the property as Glenmere, as it was renamed by Mr. & Mrs. Harrington G. Hamilton in 1947. 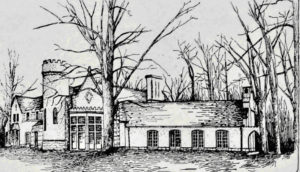 George and Margaret Edmunds sold (or lost) their property in 1937 to the Detroit Trust Company, a short 13 years after they build Bryn Glyn Llyn. The Detroit Trust Company held the property for eight (8) years, until 1945 when it was sold to Wayne L. and Nelle Kirk. Only a month after acquiring it, the Kirks platted the 18.3 acres into the Lone Pine Woods Subdivision. The subdivision has 10 building lots the largest by far being Lot No. 4 (3.76 acres) on which Glenmere stands. In platting the subdivision, Lowell Court was extended from where it ended on the north boundary of the Brookwood Subdivision right up to the Glenmere estate house in the middle of the subdivision. This is now the primary access to the estate.

In 1947 the Kirks sold Glenmere to Mr. & Mrs. Harrington G. Hamilton. He is listed in the 1948 Michigan Bell Telephone Directory with the address still being Lone Pine Road. The Hamiltons were the ones to change the name of the estate to Glenmere (“Glen” Scotch equivalent of Welch “Glyn” – a valley; “mere” – a lake or pond). Between the Hamiltons and the present owners there have been four (4) other owners. Of these four the one who owned it the longest was M.H. and Alma Fruhauf (not the trucking company) who owned the House for 19 years, from 1964 through 1983. They bought it right after a massive explosion leveled their house on Brookside DR. in 1963

There is an excellent two-page description of 350 Lowell Ct. in the 2007 booklet prepared for the 75th Anniversary of the incorporation of the City of Bloomfield Hills.