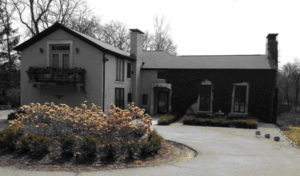 Arthur and Bessie GRISWOLD
Lone Pine Road Estates along the south side of Lone Pine Rd. between Lahser Rd. and the Township Library was platted in 1925 containing 111 residential building lots. About 1938 the Griswolds, Arthur and Bessie, purchased Lot No. 18, on the corner of Ponvalley Rd. and Lone Pine Rd. Their houses was completed a year or two later, certainly by 1941. It is somewhat unique to the Bloomfield area because of its French style architecture. Even though the subdivision had been platted 15 years earlier it was one of only 5 or 6 home built by 1940.

Arthur came to Detroit in the 1920s immediately upon graduating from Cornell University with a mechanical engineering degree. He went to work for Detroit Edison. At the end of his career with Detroit Edison Arthur was made vice-president for atomic energy development programs. As such, he was instrumental in the development of the Enrico Fermi Nuclear Power Plant outside of Monroe.

Bessie was the youngest of the six children of Samuel and Mary Moody of Detroit. 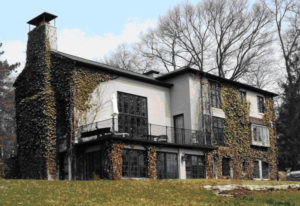 1981 Lynda Jarman & Donald Lambe
In 1981, Theodore and Joyce sold the house to Lynda J. Jarman & Donald M. Lambe for $255,000. They owned the house for 19 years. They were both employed by Michigan Bell Telephone, Co. Lynda was also a local artist.

2013 Jean J. & Heather Chidiac
After two other short-time owners, Jean and Heather Chidiac purchased the Griswold House in 2013 rescuing it from a state of neglect and disrepair. It was close to being demolished. They have invested a great deal of time, love, and money in restoring it to the fine condition that it is in today.