In 1917 the Depews enlisted New York architect, Electus D. Litchfield (1872-1952), to design their lovely summer house on Hickory Grove Road. Their new house was featured in a six page article in the 15 June 1920 issue of The SPUR, a country life magazine that also featured various sports, especially equestrian events. The Depews named their estate Hickory Grove Farm after the road on which it was located. 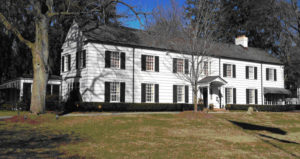 Skillman Era: (1940-1983)
The Skillmans renamed Hickory Grove Farm to Fairfield Farm. Robert Skillman was the vice president of Minnesota Mining and Manufacturing Co. He died in September 1945 (only five years after buying the Depew’s estate). Mrs. Rose Skillman continued to reside at Fairfield Farms until her death in 1983 (almost 40 years after her husband) at age 96. In 1960 Rose established the Skillman Foundation, dedicated to improving the lives of Detroit children by helping prepare them for college, career, and life. She also supported many other organizations.

In 1985, the estate was subdivided into the Chestnut Run Subdivision. However, the 1.82 acre parcel, which surrounds the house, was excluded from the subdivision plat and remains as a standalone parcel.

Current Ownership: (1994- 2018)
In July 1994 Sydney and Elizabeth Ross bought the estate and returned to the original name, Hickory Grove Farm. Through the 24 years that the Rosses have owned this historic House they have restored the original portion to its 1920s character. They have also made as number of additions to the property that blend in well with the original design of the House. In 2017 they had a grand 100th anniversary party.