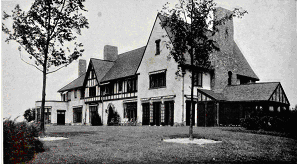 Edward P. Hammond
Edward P Hammond was the son of George Hammond who made a fortune at the end of the 19th century with refrigerated train cars for transporting meat from Chicago to the east coast.  Edward managed the Hammond Building the, first “sky scraper” (10 stories) in Detroit, and was the president of Gemmer Manufacturing Co.

Comes to Bloomfield
Space for horseback riding had become scarce in the Grosse Pointe area, so in 1916-1917 Edward P. Hammond began coming to Bloomfield from his family home on Jefferson Ave. to ride at what was to become the Bloomfield Open Hunt Club (BOHC).  He was one of the founding members of BOHC and elected to be its first President.  Hammond liked the area so much that in 1921 he bought up over 80 acres of land near the intersection of E. Long Lake Rd. and Kensington Rd. along the southeast shore of Vhay Lake which had just been created by the construction of the dam near Kensington Road.  The following year, 1922, E.P. Hammond began building his large summer estate called Hillwood which was designed by prominent Detroit architect, Robert O. Derrick.  The estate consisted of: a large manor house, extensive stables, and houses for: the stable master, the caretaker, and the chauffeur.  Three of these buildings remain as private residences today.  The Hillwood estate is in many ways similar to Walbri, the estate of Walter O. Briggs, its neighbor to the east, which was built a year or two later. 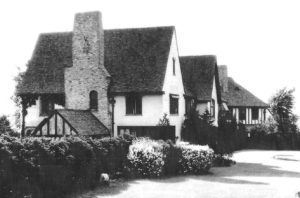 The Evolution of the Estate
George and Viola Hammond had seven children (2 daughters and 5 sons).  The five Hammond boys formed a full polo team, calling themselves the “Hillwoods”; four of them became internationally known.  Shortly after George Hammond died in 1947, the family subdivided the estate into the Hillwood Estates subdivision, keeping a large lot of almost 3 acres for their manor house.   The four other estate buildings were situated on individual lots as private residences.  The Hammond family continued to own the estate house until 1978.  There have been six owners in the 40 years since.  The current owners, Subhash and Alison Kapur, have owned Hillwood since 2014 and have invested a great deal of energy and money in making it the grand place that it is.

John Marshall is a historian and member of the Bloomfield Historical Society.