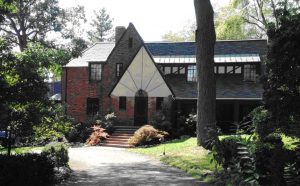 During the exciting 1920s the Detroit Free Press often sponsored and promoted building projects that were named “Ideal Home.”  In April 1927 the Ideal Home promoted in the Free Press was one built by Frank Broock, son of Max Broock who founded the Birmingham Real Estate Company that bears his name.  Frank was a builder living in Birmingham.  The house was located in a large new subdivision that was formerly the 80 acre farm of William Milldebrendt at the southeast corner of Adams Rd. and Square Lake Rd. It was named Middlesex Country Home Sites.  Although technically just inside Troy Township, the subdivision was promoted as being in Bloomfield Hills and so was all of the promotional material for this Ideal Home.  Even many years after the house was built the articles dealing with the people who lived in it always referred to themselves as living in Bloomfield Hills.

The May and June 1927 Free Press articles promoting the open house to show the house contained much detailed information about the house: the architects rendering, the plans for both levels and basement, and a detailed written description of all of the features built into the house.  The Free Press even included a picture of the front door being “opened” by U.S. Representative, Clarence McLeod. This House was the first built in the subdivision and is located on the south end on Sussex Rd. 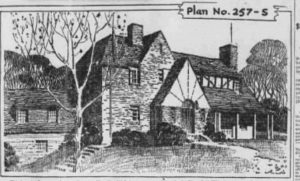 The house was owned from the early 1930s until 1962 by Leroy G. and Isabel Vandeveer.  Leroy was a prominent attorney in the firm founded by his father and Isabel was very active in Bloomfield Hills society.  The Vandeveers had two daughters, Cornelia and Lindsay, and also a maid living in the special quarters built into the house.

The second owner (from 1962 to 1984) was Harry S. Nichols, Jr. and wife Suzanne.  I found two articles about Harry both with photographs of him on horseback at Bloomfield Open Hunt.

The present owners Thomas and Amy Goodman purchased the Ideal Home in 2002 and have worked diligently to restore it to its 1927 character.  The house today looks very much as it must have when first built except that the landscaping is much more mature today.