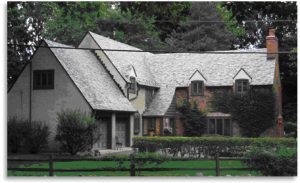 H. Augustus O’Dell (1875 – 1965) was prominent architect in Detroit and southeast Michigan where he designed many private homes and public building, such as Adam School in Birmingham. In 1926, at age 51 years, after residing in several homes during his working career, he and his wife, Agnes, purchased a lot in the newly platted Stinchfield Acres subdivision in the northeast corner of Woodward Ave. and W, Long Lake Rd. O’Dell designed their house and had it built on lot no. 14, as one of the first constructed in the subdivision. They lived there with their daughter Elizabeth until the early 1940s. When Elizabeth married the O’Dell’s leased their house and moved into a five room apartment that was constructed in the former grocery store portion of the Fox and Hounds Inn less than a quarter mile from their house.

The O’Dells then sold their Tiverton house to Harry S. Nichols and his wife Marguerite and their son, Harry, Jr. who was then 14 years old. Harry was the Detroit area supplier of Chromite Tile used in the walls of bathrooms. The Nichols were active members of the near-by Bloomfield Open Hunt Club. It was interesting to discover that the Nichols had purchased a 36 acre farm on 12 mile Rd. in Southfield just a couple years before they “switched horses”, so to speak, and purchased the O’Dell house on Tiverton. After 11 years the Nichols sold to Arthur and Flavelle Landry.

The Landrys were the first of six owners in the 44 years between the Nichols and the present owners. Although the first two owners each had only one child in the house with them, three of the subsequent owners had a total of 21 children: Landry – 7, Bowman – 8, and Lark – 6. 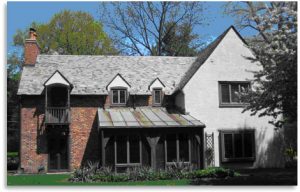 The present owners, Dwight Diener and Katy Kiyo, purchased the home in 1997 from John H. and Dianne M. Sennett. John Sennett was the president of Sennett Steel Corp in Madison Heights. Dwight and Katy have hands down been the one to own the house the longest – 23 years compared to the O’Dells 17 years. They have truly love the history, as well as, the architecture of this grand house. Katy’s carefully documented history of the House and H. A. O’Dell won recognition by the National Register of Historic Places. Inch House was placed on the Register in 2009, only the second house in the City of Bloomfield Hills to be so honored. Dwight and Katy have expended much energy in preserving this fine old home in a manner consistent with its 1920’s Root.

If you care to read more about it you can do so in Vol. 4, Issue 1 (spring/summer 2009) of Legacy, the newsletter of the Bloomfield Historical Society.