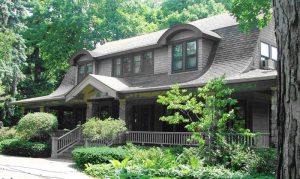 John Endicott came to Detroit from Massachusetts in 1891 at the age of 24 to work for his uncle Charles Endicott in the Newcomb – Endicott Department store.  John was first married in 1893 but Elizabeth died suddenly in 1900.  He then married Mary E. Booth in 1902. Three years later he purchased the 115 acre farm of William Smith on the north side of Quarton Road west of Woodward and east of Cranbrook Road.  For the first few years he and Mary spent summers in the old Smith Farm house but about 1911 built a fine new house a short distance to the east along the south side of what today is Chesterfield Rd.

The Endicotts had three children: a son, Robert, born just before the purchase of the farm; and two daughters, Elizabeth and Ruth, born on the Farm soon after it was purchased.  John continued with the department store as secretary – treasurer and later president until 1927 when it was sold and became part of the J.L. Hudson Co.  He was also director and then president of Merchants National Bank.  Unlike other prominent part-time residents of the area, Endicott lived year round with the family on the farm in Bloomfield.  He commuted to work down the Woodward corridor on the D.U.R. He even constructed a small building at the end of Chesterfield where he and neighbors could wait for the train out of the elements. 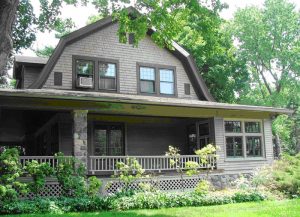 Initially, on the farm John raised and sold hackney horses which were specially bred for pulling carriages.  When the automobile cut into the use of carriages, John switch to raising prize Guernsey cattle and even created the Endicott Dairy Farms. Endicott was a prominent member of the Board of Managers for the Michigan State Fair for many years.

The Endicott Farm like so many others eventually gave way to become two residential subdivisions. In 1928 Endicott platted Brookwood (24 lots) from the 40 acres near Cranbrook Rd. Twenty six years later he sold the rest of the farm to Donald D. and Florence James in May 1954 and two month later they platted Lakewood Heights (36 lots).  John Endicott died in February 1955.

The John Endicott House proudly stands today at 290 Chesterfield Rd.  The present owners purchased it in 1984 and have been so dedicated to preserving its history that they had it placed on the National Register of Historic Places.