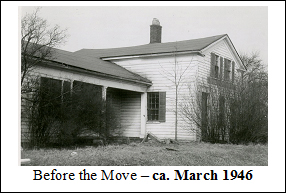 This House history is a bit different than the previous ones I have featured. The house is located in Beverly Hills on West Kennoway Rd. next to the Groves High School football stadium. In 2008 I met Jay Meehan, professor of Sociology at Oakland University. In the course of our conversation he told me that his house had been moved to its present location on what was the Thompson 69 acre estate, Kennoway, in 1946, by Otis C. Thompson. Isabel (“Izzy”) Thompson, the widow of Otis Thompson, said that it had originally been located on a farm in Bloomfield Township “near the corner of Square Lake Rd. and Woodward Ave.” However, she provided no more detail than that. An examination of the structure of the house led us to believe that it was similar in architecture and in age to the Barton Farmhouse and was built prior to the Civil War.

Of course both Jay and I really wanted to find out exactly which Bloomfield farmhouse it originally was.  I initially drew a circle around the intersection and looked from candidate houses on historic maps from 1857, 1872, 1896, etc. We needed additional clues to narrow the search. This came when I made a visit to the House and Jay showed me several pages of blue prints drawn in April 1946 for the renovation of the House following its move. The plans were prepared by noted local architect Henry Scripps Booth. This led me to contact the Cranbrook Archives to see if they had anything in their collection of Henry S. Booth material pertaining to this project. The archivist very quickly found several photographs in an album showing this house both at its original site and during the move to the Thompson property. The notation on one of the photographs gave a much needed clue: “Otis Thompson house when on Woodward below Square Lake.” We could now focus on only two houses that in the 1872 were on Woodward between Square Lake and Hickory Grove. After trying several different methods of determining which house Otis moved in 1946, the sketch in the Rural Property Inventory record for 1938 made it quite clear that the House was the one on the west side of Woodward. 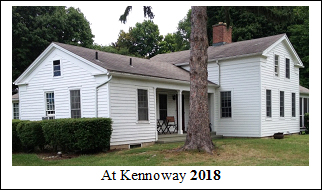 It had been the farmhouse of three generations of the James O’Brien family who farmed the land from 1854 to 1909, 55 years. Dr. Leo Breisacher, a Detroit MD, purchased the O’Brien farm in 1909. It is unknown who lived in it between then and when was sold, 37 years later in 1946 by the executors for the Leo Breisacher estate. It was probably rented out. Otis and Izzy Thompsons owned the house from April 1946 through 1994, 48 years (almost as long as the O’Briens.) Professor Meehan and his wife, Pat, have owned it now for 24 years.