In 1914 one of the earliest subdivisions platted in Bloomfield Township was created by Herbert and Elizabeth Broughton the South West corner of the intersection of Quarton Rd. and Wing Lake Rd. adjoining the north shore of Wing Lake. The Broughton’s Park Subdivision contained 29 lots. In 1916, the Broughtons sold five (5) lots to E.W. & Allice McGookin. The original portions of the house may well have been built by the McGookins in 1917, as noted in the township assessor’s field sheets.

L.A. Young – In 1920 the McGookins sold the property to successful automobile spring manufacturer, Leonard A. Young and his wife Ola. In June 1925 the Youngs purchased nine (9) more Lots to giving them about one half of the entire subdivision. The Youngs used the Wing Lake house as their summer home with their primary residence at 918 W. Boston Blvd. in Detroit. The Youngs owned the house and 15 lots through 1951, a total of 31 years.

A. Jerome Geisler – In April 1951 the Young Estate was sold to A. Jerome Geisler and his wife, Florence for $41,000. Geisler was the owner of the Geisler Plumbing and Heating Co. in Dearborn. Geisler was an avid equestrian, being a member of the Oakland County Sherriff’s Posse. In 1956, five years after buying the Young estate, the Geislers “vacated” eleven lots and platted the Geisler’s Wing Lake Heights Subdivision containing eight residential lots and a large Outlot A on which he constructed a stable and large garage. Nine years later in 1965 the Geislers eliminated the stables and garage and platted the Outlot A into Geisler’s Wing Lake Heights No. 2 Subdivision. It contains six residential lots located around a court named Geisler Ct. 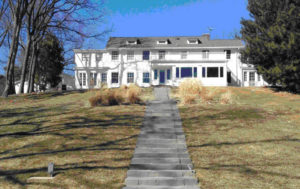 The Lashes owned the House for 32 years (a year longer than the L.A. Youngs). In October 2015 the House was sold to Dr. Joel L. Young and his wife, Mindy. (Interestingly, Dr. Young’s middle name is “Leonard”, the name of the first owner.) The Joel Youngs have spent the last two year lovingly restoring and renovating this grand lake house with its exquisite view down the full length of Wing Lake from where it is perched over 60 feet above it.