First: A note about Grotesques. They’re the strange-looking heads you’ll see interspersed throughout the mural. They were most likely carved out of butternut by Alfred Nygard and are strictly decorative (if you like that sort of thing). Most of the grotesques are unique but there are some duplicates.

In 1915, from June 17 to July 25, seven young scions of Detroit, led by 21-year-old Edsel Ford, took a Transcontinental Road Tour from Dearborn to the Panama-Pacific International Exposition in San Francisco. They did it on roads that were all dirt (and some places very muddy) in a Model T Touring car, a Cadillac 8 and a Stutz 6-F Touring car.

One of the drivers, Frank P. Book, moved to Bloomfield in 1917 with Gertrude, his new bride. By 1922 the young couple had built Wingland, a sumptuous home on 40 acres on the shores of Wing Lake. In this country home Book commissioned an 88-foot-long mural recapturing the highlights of the remarkable 1915 road trip and based on photographs of the trip shot by Edsel Ford and preserved in a journal commemorating the adventure that Ford presented to each participant.

Book, along with his family, would build the Book Tower, Book-Cadillac Hotel and other prominent features of the Detroit skyline as they sought to create a “Fifth Avenue of the West” on Washington Boulevard.

In 1930, as country homes became an unnecessary expense – especially for Depression-era millionaires in the commercial real estate business – Book’s close friend Edsel Ford bought Wingland with the understanding that Frank could buy it back at any time.

Ford never lived at Wingland and Book never bought it back. Ford started selling the property in 1942, just before he died and his Estate completed the process. 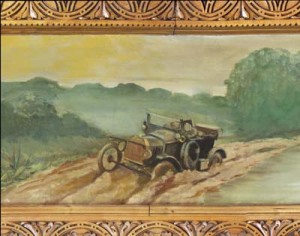 Bloomfield Historical has been working on this project for several years. Now, thanks to the current owners who graciously put up with two days of photography, you can take an unprecedented look at the mural that few people knew about and fewer have seen.

We’ve an overview of the handsome living room where the mural has been since it was painted, presumably by Reginald O. Bennett in 1922, and then each wall can be viewed separately. As with the 1915 bird’s-eye view map of Bloomfield Township, you can zoom in to see even the smallest detail – such as the rifle in a scabbard and the all-important tow-rope on Edsel’s Model T.

The complete story of the “road trip,” the mural and how it was photographed to preserve it for posterity is told in an hour-long video presentation you can view by clicking here.

To navigate around the image with the Zoomify viewer, use either the slider or the “+” or “-” signs to zoom in and out.  Use the arrow buttons to pan up and down or left and right.  You can also use your mouse to drag the map around.  Depending on the speed of your internet connection, you may get some blurriness when moving around the image.

Because the murals on the upper walls are long and narrow, a reference image has been provided for scale.  To navigate around the full image in Zoomify, look for the thumbnail image in the upper left corner.

Here’s the view of the room room where the mural is located to provide a reference point of how the murals are layed out: 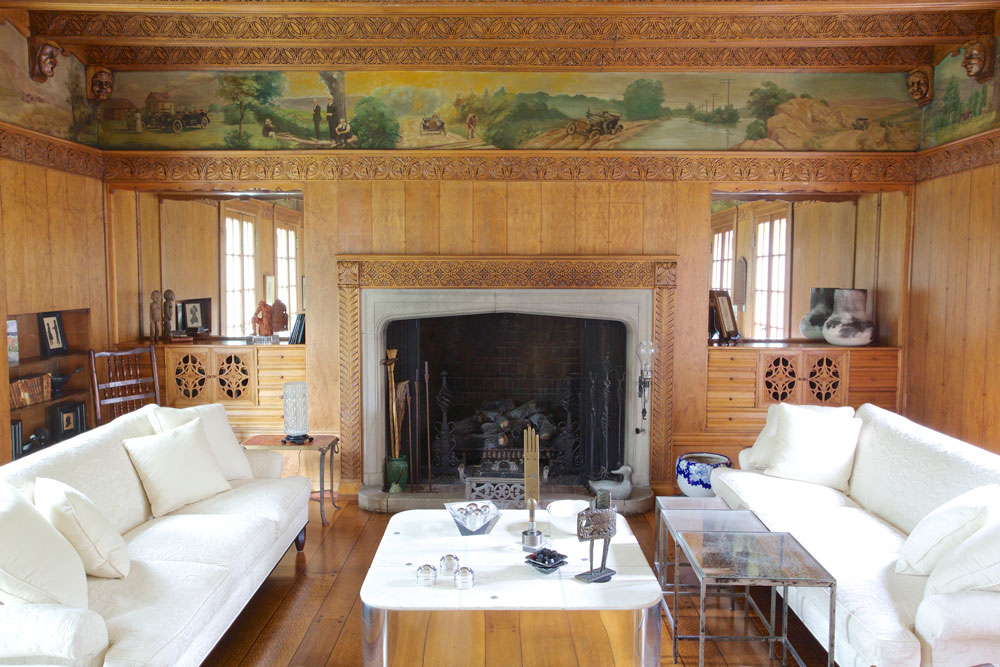