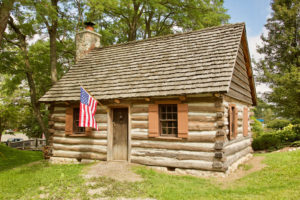 In December, 1845 32-year-old William Craig bought 40 acres in Section 20 of Bloomfield Township for $200 from Abraham Sodon. The property was located on a rolling hillside on what would become Lone Pine Road between Wing Lake and Franklin roads. Early records don’t indicate whether the Cabin existed when the purchase was made or whether Craig built it afterwards.  The Cabin measures 18-by-24-feet and is constructed of round logs with square notching.  Jim McCabe, a curator of The Henry Ford describes it as “the last area example of folk or vernacular architecture.” It’s “one of the simplest and quickest of log construction methods… and represents the first phase of settlement. It is a remarkable survivor since features such as these don’t stand the test of time.”

William’s parents had brought their family from Ireland and, in their 70s, were living with him according to the 1850 Census.  Three generations of Craigs lived in the Cabin at one time or another.  On New Year’s Day of 1851 William married Sarah Barden who had been born in New York, but whose family was originally from Massachusetts. He was a farmer, an early member of the local Wing Lake Presbyterian Church and took part in Township government as an elected Overseer of Roads. 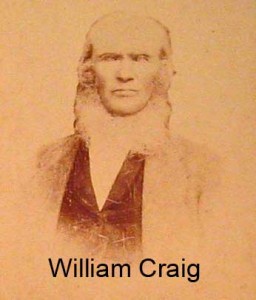 Sarah and William reared 11 children in the small cabin. The children slept in a loft under a steeply-pitched roof and attended the nearby one room Greer School.  William died in 1881 (“worn out” was listed as the cause of death) and passed the property on to his son William B. Craig.

As log structures disappeared from the Bloomfield landscape the Craig Cabin remained.  It was lived in almost continuously, once as a hunting lodge but primarily as a family home.  The stories of the families who followed the Craigs form other chapters as Bloomfield’s wilderness evolved into today’s comfortable suburbia.  Things changed, however, in 2005 when the land was purchased for development. Three years later the Cabin was donated to Preservation Bloomfield. With some of the Craig descendants watching, it was moved to the Bowers School Farm where it is undergoing preservation and restoration.

It is truly a “remarkable survivor” of pioneer life in Bloomfield Township.  Here’s a video showing the disassembly and the moving of the Craig Cabin to the Bowers School Farm: