These are professionally made photo albums of 7” x 9” Black and white pictures taken probably between 1927 and 1935, both of the houses themselves and the grounds of the estate. There are 14 photos in one album and 15 in the other. The album covers measure 11.5″ by 15.5″.  Click on the links below to view the albums. 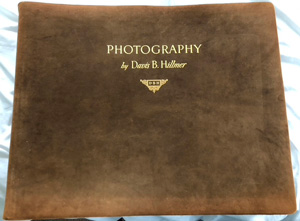 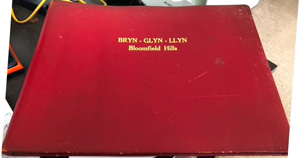 DBH was born in Plymouth, MI, in 1896 where he grew up and was educated. As a teenager DBH traded a Daisy Air Rifle (made in the plant in Plymouth) to his oldest brother in exchange for a simple camera. This was the start of a career as a self-taught commercial photographer that spanned over 50 years. The earliest photographic endeavor that DBH pursued was the printing of postcards having his photographs of people and places in the Plymouth area.

In 1918, during The Great War, he served in the US Army and was stationed in Camp Custer in Battle Creek. While there he set up a photographic lab and continued developing his skills. In 1922 at the end of the war, DBH established a commercial photographic business in Midtown Detroit. His career spanned five (5) decades (1922 – 1972). His clients included many top Detroit retailers: Newcomb-Endicott, Kline’s, Saks Fifth Avenue, Crowley-Milner, Meyer Jewelry Co., B. Siegel, and Kern’s Dept. Store. But his primary client was the J.L. Hudson Co., which, according to the Detroit Historical Museum, hired DBH to chronicle its interior and exterior displays from 1922 until his retirement in 1972. Over these 50 years DBH amassed a collection of thousands of high quality black and white photographs taken for these commercial clients.

DBH died in 1979, at age 83 years, and is buried in Riverside Cemetery in Plymouth.

Donation of the DBH Photograph Collection:

Two of the last items in DBH collection to be donated were the two photo albums mentioned in the opening paragraph above. It took a number of years for DW to finally identify the two estates in the albums as being located in the Bloomfield area.
(In addition to the physical photograph albums, scanned images are available on the Library website.)