Joseph Gilbert from Ontario County, New York, was one of the early pioneers in Bloomfield Township. He purchased the West ½ of Section 28 (320 acres) on 24 June 1823. His property was included the southwest shoreline of the lake named after him and was bounded on the west by present -day Telegraph Road. Not many years after establishing his farm his wife, Nancy died. Joseph buried her in a plot on his farm a couple of hundred feet from the shore of Gilbert Lake. Later he was also interred near his wife. For the next 80, or more, years, many of he pioneer families also used this small 150 foot square graveyard to bury their loved ones. It became known as Gilbert Lake Cemetery and shows up on historical maps from 1872 through 1908.

In 1917 Casper Case (1848 – 1939), petitioned the Circuit Court of Oakland County to have Gilbert Lake Cemetery “vacated” – that is, to have the remains and grave markers moved to another location. Casper Case was the grandfather of Homer Case (1915 – 2004), the long-time Supervisor of Bloomfield Township (1963 – 1981). Mr. Case claimed that the cemetery was overgrown with grass and weeds, and that there was no one to care for it. His petition was granted on 28 May 1917. The judge appointed two (2) men to move the “bodies and tombstones” in a proper manner. Three (3) local established cemeteries were identified as candidates to receive the graves from Gilbert Lake – Roseland Park in Berkley, Greenwood in Birmingham, and Franklin Cemetery.

The minutes of Greenwood Cemetery Association record that it was agreed in their meeting on 21 February 1917 to “. . . accept the stones with suitable foundations for the removal of Gilbert Lake graves”. The work of moving the remains was completed in 1919. The Record of Interment for Greenwood Cemetery lists 53 graves were received and located together in Section H (Lots 25, 26, 36, 37, 38, and 39). This is area is along the west fence. Forty-nine (49) graves were removed to Roseland Park Cemetery at the corner of Woodard Ave. and Twelve Mile Road and placed together in special Section 25. This is a small triangular plot area on the south side of the cemetery along Twelve Mile Road. A special sign identifies the graves as coming from Gilbert Lake Cemetery. Most of the records for Franklin Cemetery were destroyed in a fire many years ago making it impossible to determine how many (if any) Gilbert Lake graves were relocated there.

The journal of all burials in Gilbert Lake Cemetery over its 80 years of existence is still being sought. This would be a wonderful historic discovery should it ever be uncovered. 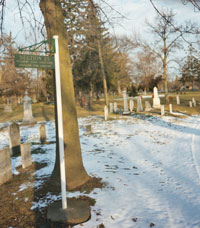 In 1927 (eight years after the last graves were removed) the portion of the old Gilbert Lake Farm on the shore of Gilbert Lake was platted into the Shadow Acre Estates subdivision. Included within the boundaries of this subdivision, but without any identification, is the half-acre burial ground that once contained the remains of a large number of the pioneers of Bloomfield Township.