The Historic Wing Lake Schoolhouse is located at 6490 Wing Lake Road where it crosses Maple Road in Bloomfield Township, Michigan.

It is the oldest standing school in the Bloomfield area and has been in continuous service to the Schools and the community since first erected in 1859.  Built in the Greek Revival style from fieldstone gathered at area farms, it was designed to be “an honor and an ornament” to the community.

Within its single classroom one teacher taught children of all ages in an un-graded setting. In 2007 the Bloomfield Hills Schools and community began an extensive restoration of the Historic Schoolhouse and today the single classroom is furnished as it would have been in the late 1800’s.  The Schoolhouse welcomes classes of schoolchildren who come to experience a day-in-history and provides a community gathering place for social and educational activities.

A Little History (from the Wing Lake School brochure) 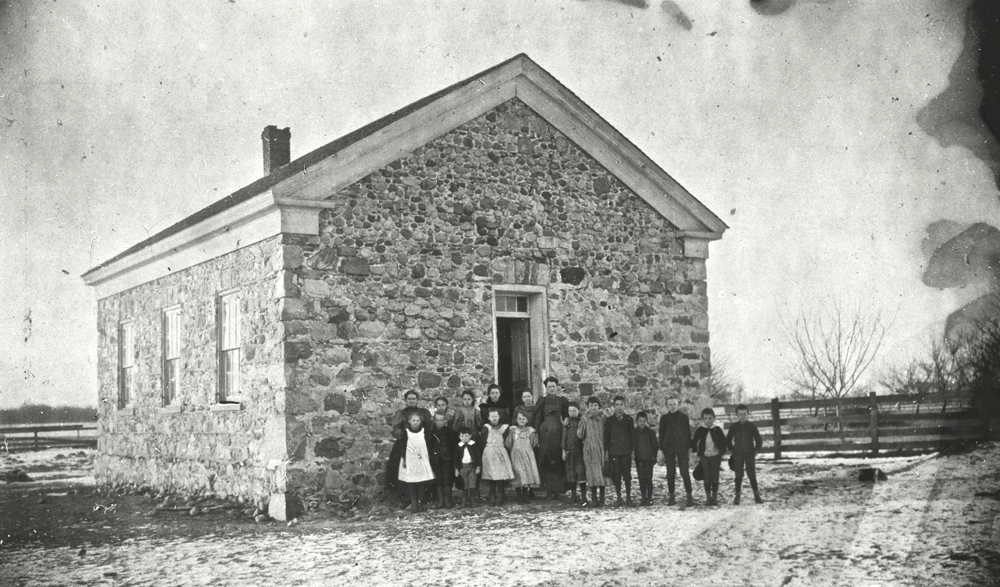 Emerging from the War of 1812 with a distinguished record, Lewis Cass was ready for his new challenge as Governor of the territory of Michigan. Conditions in post-war Detroit were grim. Adding to the general malaise, two government surveying teams charged with laying out counties and townships were discouraged by the wet winter of 1815. After a cursory look around, they sent word to Washington that the area north of Detroit was not fit for cultivation. Surveyor General Tiffin published their unfavorable report. In order to improve the situation in Detroit, open the rest of the territory and achieve statehood, Cass needed to prove the report wrong.

In October, 1818, at the urging of Cass, Sheriff Austin Eli Wing and a small group of friends set off on horseback to investigate for themselves, traveling north on the Saginaw Trail (which we now call Woodward) and eventually veering off to the northwest. Leaving the swampland behind for oak openings they came to a cluster of lakes. The first lake they named Wing, followed by Cass and Elizabeth (after Cass’s wife.) Wing took up 320 acres on the east shore of “his” lake – where the Schoolhouse sits. The report of their expedition in the Detroit Gazette (November 13,1818) helped dispel the myth of the Tiffin survey. In glowing terms they shared the good news that “the land was suitable to grow grain; water power was available to supply the mills; stones were plentiful enough for building foundations and apple trees were already present.”

The Early Years
In a short time settlers from the East began to arrive. By 1824 Jacob Sly opened the land across Maple from the Schoolhouse. Then Deacon Elijah Bull acquired half of the land belonging to Austin Wing. Both of their homes are still standing. These early pioneers valued education and quickly began holding classes in a log house at Sly’s Corners.

By the mid-1830s Michigan began to define a statewide school system and Deacon Bull transferred to the directors of the new School District a small piece of land 4 rods square “to erect thereon a District School House.” Most likely they built a small frame school which also served as a meeting place for the Presbyterian church founded by Deacon Bull.

As the farms and orchards around Wing Lake began to flourish, the neighbors determined they would build a “proper” schoolhouse. Bull deeded a bit more land to the district and work began on a schoolhouse. It was designed in the Greek revival style which was predominate at the time and built of local fieldstones.

Imagine the excitement in 1859 when the first students stepped through the centered door into a small vestibule with two doors opening into the classroom – one side for boys and the other side for girls. The large light- filled room with its unusual high arched ceiling must have been inspiring. More than a century and a half later the little stone school continues to serve the Bloomfield community.

Transitions
The first change to the building came sometime after 1870 as belfries began to appear atop schoolhouses nationally. Not to be outdone, local residents added a belfry with a loud bronze bell to call the children.

In 1928 Geneva Kniesel Forslund came to teach at Wing Lake. From the moment she was handed the key, through the next 38 years, she oversaw the growth both of the children and the Schoolhouse. In the early ’30s an addition to the front provided a cloakroom, the first indoor plumbing and a fuel room. This completed the footprint of the Historic Wing Lake Schoolhouse we see today. 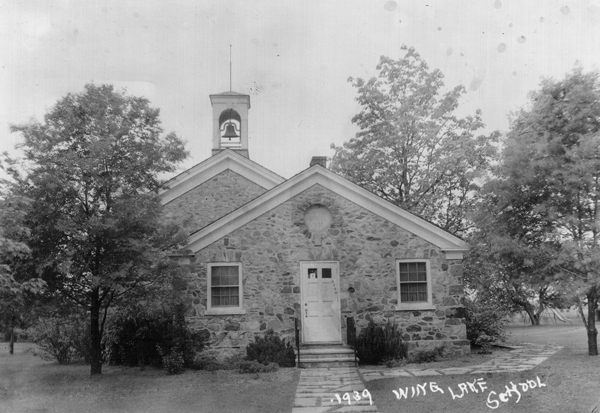 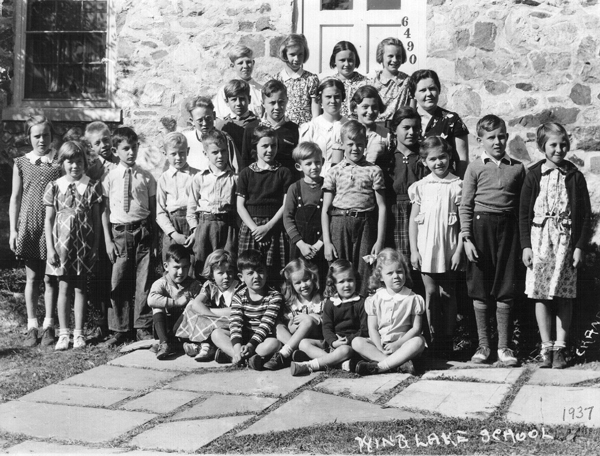 The single classroom continued to serve Geneva and her students of all ages. In 1948 the first classroom addition marked a major change as many additional classrooms would be added to meet the needs of the rapidly growing Post-War community. In 1976, in celebration of the nation’s Bicentennial the Schoolhouse was designated an official community heritage project with support from Bloomfield Township, the Schools, the Library and the State. Many volunteers came together to recreate a period classroom designed to provide children with a “living history experience.”

Restoration Begins
When a decision was made to replace all of the classroom additions with a new freestanding building, a partnership was formed between the Bloomfield Hills Schools, OISD, the Township and the Bloomfield Historical Society. Working with preservation architect Gene Hopkins FAIA of HopkinsBurns, the group has restored the Schoolhouse following the standards established by the National Trust for Historic Preservation. In 2013 the Schoolhouse received historic site recognition from the DAR. 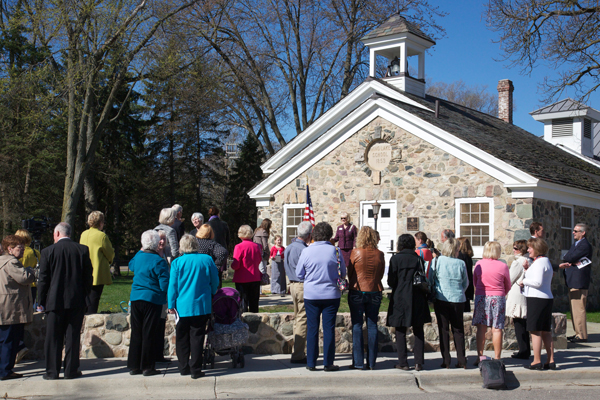 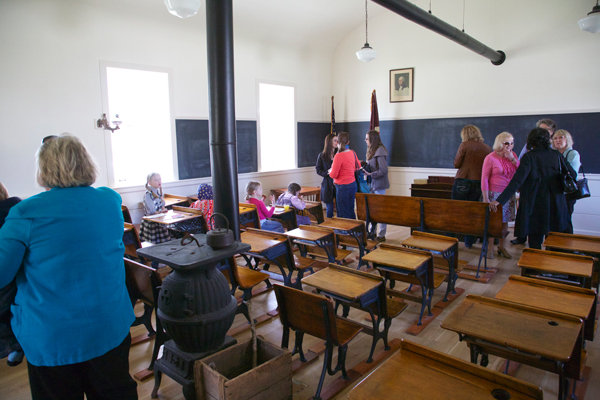 Today
The Schoolhouse is ready for the next 150 years. Classes of schoolchildren visit again to experience a day-in-history and the community has a new gathering place for activities of a social and educational nature. classrooms would be added to meet the needs of the rapidly growing Post-War community.

NOTE: The history of the Wing Lake Schoolhouse is well-documented, and work is currently underway to add those materials to this page including: photos, first person accounts, newspaper articles, land records, restoration project details and more.  Please come back here again to see what’s new.

If you were an elementary pupil at Wing Lake School between 1859 and 1973, we would love to hear from you. Do you have memories of a favorite teacher? Are there photos or stories written in pencil on primary paper in your attic? Please contact us at info@bloomfieldhistoricalsociety.org