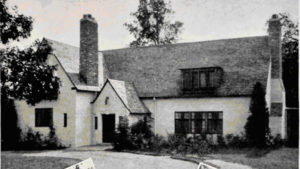 At the beginning of the 20th century, Millard T. Conklin owned a 30 acre estate, Oakhurst, where the current Woodward Ave. entrance to Cranbrook Educational Community (CEC) is today.  In 1924 he sold a 3.6 acre triangular parcel on the west side of Cranbrook Rd, to Ralph Stone.  This parcel and the house that was built on it has been known by four (4) different name over the past 93 year.

Stonelea – In 1925 the Packard Charlton Building Co. constructed this 6,000 sq. ft. Country French style house designed by Albert Kahn for Ralph Stone and his wife, Mary. There is also an 800 sq. ft. carriage house and 3-car garage adjacent to the main house. Ralph was the prominent Chairman of the Security Trust Co. The Stones named their fine estate Stonelea. Ralph, a friend of George Booth, was a trustee of the Cranbrook Foundation and served two terms as a Trustee of the University of Michigan.

Belwood – In 1936 Stone sold the property to William J. Belknap and his wife, Kathleen. Belknap was a prominent patent attorney in Detroit. Like Stone, the Belknaps used their name when they renamed the estate Belwood. Unfortunately, William (age 56) died in November 1941. Then in June 1942, Kathleen Belknap leased the property to aviator, Charles Lindbergh and wife Anne for one year. Lindbergh was a consultant to Henry Ford at the time. While living in Belwood the Lindbergh’s son, Scott, was born the 5th of their 6 children.

Kathleen Belknap sold the estate in August 1943 to Damon S. and Ivy Gall. Damon was the manager of the Pathfinder Magazine for the Scripps-Howard Newspaper organization. During their five year tenure, the Galls continued to call the estate, Belwood.

Kyes House – The next, and by far the longest, owner was Roger M. Kyes and wife Helen, who bought it from Gall in August 1948. Roger Kyes was an Executive V.P. at General Motors. And in 1953 he served a year in the Eisenhower administration as Deputy Secretary of Defense. For the 55 years that the Kyes owned the estate it was known, appropriately, as Kyes House. Roger died in 1971, but Helen Kyes continued to live in the house until she died in 2003 (thirty-two years later) at age 98 years. 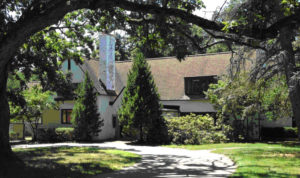 Lyon House – The Cranbrook Educational Community purchased the property from the Kyes estate in 2004 with the support of benefactor and trustee, Wayne & Maryann Lyon. The house is now known as the Lyon House. It looks much the same as it did when it was first built in 1925 except that the landscaping has grown up around it and makes it difficult to see clearly. It is currently unoccupied and the plans for its future have not been made public.