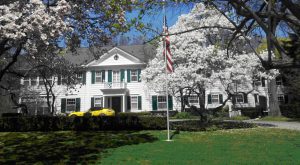 In 1926 developer Judson Bradway collaborated with the Vaughans, Vernors and Hodges to create the Chelmsleigh Addition to Bradway’s County Club Estates. The two former 80 acre farms of C.W. Hodges and the Vaughan Family on the north east corner of Lone Pine Rd. and Lahser Rd. were platted into 71 residential building lots.

Carl E. and Ruth H. Huyette were the first to buy and build in Chelmsleigh. Their Colonial house designed by architects, Benjamin and Straight, was constructed in 1928 on lot No. 22 right in the center of the new subdivision. They called their property Rocky Terrace. Carl was the president of the Harding Lumber Company in the 1930s.  The Huyettes and their two daughters lived in the house for only 5 years.  They appear to have lost the house in the Depression but by 1943 had moved into their new home which they created by remodeling the stable on the property of George T. Hendrie on Manorwood Drive just off Woodward south of West Long Lake Road..

James and Grayce Vernor acquired the property a year or two later and owned it until 1955.  Based on information found in the historic city directories it appears the Vernors rented the house to at least two different prominent business executives, as well as, living in it for part of the time themselves.  Prior to buying the house, that they renamed Magnolia Terrace, the Vernors had owned and lived in the old Vaughan stone farmhouse on Lahser Rd. on the east edge of Chelmsleigh.

The current owners Jay and Marty Wetzel acquired the property 36 years ago in 1983 and lived there with their three daughters: Liz, Dawn and Mary.  They have done much to maintain it in excellent condition and have invested a great deal of time and energy in documenting its history.