One of the oldest houses in Bloomfield Township is Old Oak on Wing Lake Rd. mid-way between Maple Rd. and Quarton Rd. It was built by pioneer Elijah E. Bull for his first wife, Melinda, and later his 10 children. Deacon Bull, as he was known, came from New York State by way of Monroe, Mich. He acquired the 160 acres on the south east side of Wing Lake in 1829 from the original owner Austin E. Wing who went down to Monroe. Examination of the basement of the House indicates that originally it may have been a much smaller stone structure. Deacon Bull was instrumental in founding a Presbyterian congregation nearby. Also he and his second wife, Mary Ellen, donated a portion of their farm on the corner of Wing Lake Rd. and Maple Rd. to District 6 of the township school board. It was on this parcel that the landmark Wing Lake Stone schoolhouse was built in 1858 which still proudly survives. Elijah Bull died in 1871 at age 70 years and was buried with Melinda in Franklin Cemetery.

Elijah’s son, William, continued on the prosperous farm only a few years before selling it to another township pioneer, William Durkee, in 1874. The farm remained property of the Durkee family for almost 20 years until they sold it to Jefferson M. and Mary Thurber in 1893. 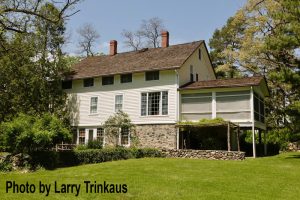 Thurber was employed as the treasure of the Buhl Hardware Co. for decades. Jefferson probably never actually lived at Old Oak. Rather he set up his oldest son, 25 year old Thomas L. Thurber, to operate the farm for him for the next 32 years. In 1925 Jefferson partnered with the Wing Lake Land Development Co. to plat the farm into the Wing Lake Shores Subdivision. The historic Old Oak farmhouse remains situated on a double lot in the subdivision.

In 1926, almost immediately after the platting of the subdivision, Old Oak was sold to John W. and Louise Black Gillette. John Gillette became president of a company specializing in auto textiles. The Gillettes lived there for 36 years until 1962, selling to William E. and Nancy S. Chickering who owned the property for 13 years.

The current owners purchased Old Oak in 1975. They have done extensive research on the history of the house and have carefully cared for it for the last 44 years. Old Oak is a treasure of Bloomfield Township.