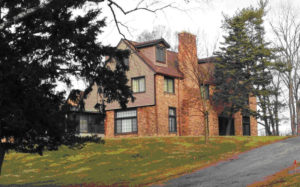 The property between Opdyke Rd and the GTWRR R.O.W. where E. Hickory Rd. abruptly ends has an interesting history. Back at the turn of the 20th century it was part of the huge Charles Stinchfield estate. In 1924 Stinchfield sold a 38 acre parcel to Anna Vhay and in 1929 it was platted into Assessors plat No. 1 containing 10 building lots.

On a couple of these lots Charles H. O’Shei in 1929 built a handsome estate compose of the main Estate House with garage and an indoor swimming pool, as well as, an interesting combination Stables and Guest House structure. The stables had stalls for four of his competition horses. O’Shei was the president of Trico Windshield Wiper Company that his father founded in 1915. Unfortunately, the estates House was destroyed by a massive fire in January 1938. The Stables/Guesthouse survived and is still in use today.

George A. Bee and his wife, Helene, purchased the O’Shei proper in 1940 and built a new main house which survives and is visible today from Opdyke Rd. across from St. Hugo of the Hills Catholic Church. George Bee was the president of the Palmer-Bee Company which he took over from his father and founder, William Bee, upon his death in 1943. The company made products used in conveyer and assembly lines systems. 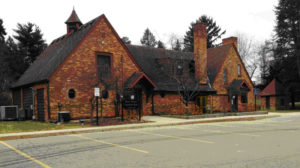 In 1956, about 15 years after acquiring the property, George Bee constructed a Palmer-Bee manufacturing plant and office along the GTWRR train tracks to the east of this residence. This he may have done without the express approval of the City of Bloomfield Hill as his property which was zoned for single family residences and limited private businesses. Conflict with the City may have prompted Bee in December 1965 to sell the 15 acres of his property containing the factory to Oakland Community College (OCC) which converted the plant into the George A. Bee Administrative Center. The center is so situated that it cannot be seen from Opdyke Rd. and is barely visible from Kensington Rd.

George Bee also donated the 2.5 acres with his residence and Stable/Guest House to OCC. The House was initially used as the home of the president of the college. It was sold in the late 1970s to an organization not connected with OCC. The interesting dual use Stables/Guest House, however, is still used today by OCC to house the Doris Mosher Foundation.