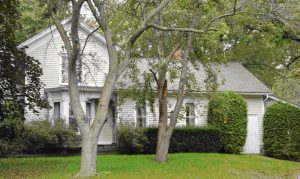 In 1852 Cooper Pickering (1828-1894) and his new wife, Eliza (1829-1888), arrived in America from their home in Lincolnshire, England. They first settled on a 150 acre farm just to the southeast of the village of Franklin. In 1879 Cooper added to the Pickering land with the purchase of the 166 acre farm formerly owned by Peter Van Every. Cooper set his son, George H. Pickering (1857-1931), and his wife, Charlotte (Lottie) Forman (1862-1941), up on the farm along Franklin Rd. just north of the Franklin Cider Mill. Cooper and Eliza moved to the Village of Birmingham in 1884 in their retirement.

George H. and Lottie Pickering built a new large frame house in 1888 and moved out of the small farmhouse that was originally on the property. The Pickerings grew a variety of crops on the farm and raise a large herd of cow. Later George and Lottie also planted a small orchard of peach and apple trees. Their youngest son, Russell W.C. Pickering (1900-1975) worked the farm and orchard with his father.

In June 1925, Russell married Helen Brodie (1903-1990). Russell Pickering continued to expand the Orchard. He also contracted with owners of surrounding orchards to gather and transport their apples to Eastern Market in Detroit. They then bought a second-hand cider press and donut machine. Russell, with the help from his son George R. Pickering (1932-2017) and some friends, turned the cider press and the donut machine into a local business. At the end of the season in 1964 Russel and Helen closed down their apple business. In 1979 the State of Michigan named the Pickering Farm a Centennial Farm. Over many years, Russell and Helen sold of much of the original 166 acre farm for residential subdivision development

George R. Pickering, the 4th generation of the Pickerings went on to graduate from Michigan State University and have a career as designer for the Chevrolet Division of GMC. He continued to live in the Pickering homestead (now just 10.3 acres) until his death in October 2017 at age 85 years. His three sons are the 5th generation of Pickerings and are in the process of determining the fate of the Farm and its historic buildings.