Carl R. Raquet and his first wife Florence purchase Lot No. 71 in the large Lone Pine Road Estates subdivision in July 1926. The Lot is located at the very southern end of Ponvalley Rd. where it meets Timberlake Dr. Carl was vice president of the Detroit Steel Products Co. In the November 1926 issue of The Afterglow magazine a sketch of the Raquet House appeared drawn by architect Clair W. Ditchy. A few months later in the February 1927 issue of The Afterglow a comment appeared stating that Carl Raquet’s new house was close to completion. While the house was being built Carl divorced Florence and married second wife Alice. Ten years later, about 1939, Carl appears to have lost the house, probably the victim of the Depression.

Paro M. and Leah Thomas purchased the house in 1941. Mr. Thomas was the first secretary/treasurer of the new Detroit Lions Football Organization and a founder of the WJR Radio Station. Leah Thomas was also an executive with WJR for many years. While the Thomas family lived in the house, both daughters were married it – Blanche in 1948 and Marlene in 1951. The same year as their second daughter’s wedding the Thomas’s sold the house. 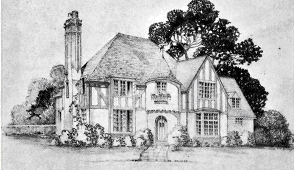 The third owners were Joseph F. and Mary Flaherty. Joseph was vice president of the Johnson Bronze Co. The Flaherty’s and their four daughters lived in the house 33 years – the longest of all of the owners. Although Joseph died in 1975 at age 66 years, Mary continued to live in the house until 1984.

The next owners were Delano and Adriane DeWindt. Delano was chairman of the Eaton Corporation and for several years was president of the Bloomfield Hills Country Club. A number of newspaper articles during this time mention Delano as an excellent amateur golfer.

Gary R. and Lynne Wood purchased the house in 2002 and owned it for14 years. During the time they lived there Gary Wood was in the automobile sales business owning the Southfield Chrysler Jeep dealership. In 2003 a major addition was built on the south end of the house.

Quinn and Alexis Kiriluk are the current owners and live there with their young children. Quinn is an executive in the Kirco Corporation. When he gave me a tour of the house he showed me a box of Win-Dor steel casement window stops that had obviously been left in the basement from the time the house was built over 90 years ago. Those windows are still in the house today.