Bloomfield Downs Subdivision
In 1927 Edward Butler had a grand scheme to create an English Style (residential) village in Bloomfield Center on E. Long Lake Road just to the east of the newly built Fox & Hounds Inn. He platted a subdivision of 48 small lots. Builder Frank Couzens (son of US Senator from Michigan, James Couzens) purchased several of the lots. He built a lovely English cottage designed by prominent Detroit area architect, J. Ivan Dice and sold it to Max Stringer in 1929. (Note that only three of the planned 48 cottages were ever built. They still exist today.) 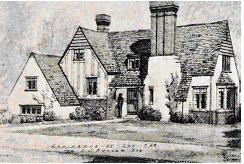 Max & Grace STRINGER
Max and Grace lived in the house with their young daughters Joan and Ann, and a live-in house keeper. Max was a partner in the Watling, Lerchen & Hayes Brokerage firm and was sent to Manhattan in 1931 to represent the firm on the New York Stock Exchange. He sold the house back to Frank Couzens.

Raymond & Mary BOWER
Raymond and May Bower bought the house in 1934. Raymond was a lifelong employee of the Burroughs Adding Machine Co., rising to the level of Vice President of Engineering before retiring in 1956. The Bowers had three children (two born after they bought the house): Mary, Alan, and Stewart. Like the Sringers, they also had a live-in housekeeper. (Although quite small, only about 2,200 sq. ft., the house contains a nice suite for the Housekeeper.) After Raymond died in 1962 and Mary in 1990, son Alan continued living there another 26 years until 2016. In recent years the house has become almost invisible by traffic passing on Long Lake Rd.

Bloomfield Downs Office Building
In 2017 the house was placed on the real estate market. Lawyer Paul DePorre whose offices are in the historic Bagley Inn at 101 W. Long Lake Rd. purchased it. In December 2017 Paul and his brother Pierre were successful in obtaining a variance from the City of Bloomfield Hills Zoning Board to allow the house to be restore, renovated and used as a small office building. This work is underway and it is currently on the market as rental office space. The exterior is to be kept true to its original 1929 design. It is wonderful to clearly see this little gem of a house from 1929 now that the overgrown foliage has been cleared way.