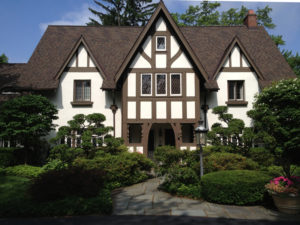 Frank Carter – in 1913 Frank Carter the editor of the “Michigan Investor” magazine purchased 23 acres on the west side of what is today Covington Rd between maple and Quarton Rd. Carter and his wife, Nellie, immediately built the house that they called Red Oak. Fifteen (15) years after creating Red Oak, Frank died at age 65 years. Nellie sold the estate to the Kent-Moore Corporation and eventually moved to California. The corporation was owned by two men: William Kent and John E. Moore. The company designed and manufactured specialized maintenance tools for the automobile industry.

John Moore and his wife Ipsa, had a family of three children at the time of the acquisition of Red Oak. They occupied the large estate house while William and Hazel Kent (with no children) lived in a smaller house on the north side of the 23 acre estate. They now called the combined property Red Oaks, adding the “s”. There was a common entrance marked by two stone pillars, with lantern lights on top, on the west side of Cranbrook Rd. (now Covington) opposite the Oak Street intersection. About 1940 Kent and Moore formally split the 23 acres property into two separate 11.5 acre parcels. 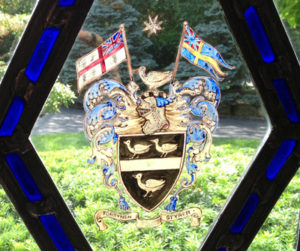 ohn and Ipsa Moore moved to Vero Beach, Florida, in the 1947. Oldest daughter Mary Virginia and her husband, John Annas, moved into Red Oaks with their two daughters. John Moore died in 1957 and in 1965 Ipsa officially deeded the Red Oaks estate to her three children and their spouses. In 1966 the three Moore siblings and spouses joined with developer and neighbor, William J. Pulte, in platting the property into the Red Oaks of Bloomfield Village subdivision of 10 lots. Mary Virginia and John Annas kept 0.715 acre Lot No. 3 where the estate house is still located today.

In 1975 Mary Virginia Annas sold Red Oaks house and lot to Richard T. Pudlo. He sold it 18 years later in 1994 to the current owners, Ron and Annie Cohen. The Cohens have taken wonderful care of this 105 year old house for 24 years. It is again on the market and was featured in a “House Envy” article in the Detroit free Press in July.

The north half of Frank & Nellie Carter’s original 1913 Red Oak estate that went to John Kent in 1940, was platted in 1990 into the 10 lot Kent Ridge subdivision.