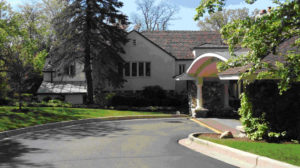 Jay Basset
In 1902 Jay Bassett purchased a 20 acre farm along the south side of E. Long Lake Rd. a short distance west of Kensington Rd.  On the farm was a large cow barn to which in 1910 he attached the old wooden one-room Schoolhouse from the corner of Long Lake Rd. and Woodward Ave., which was being replaced by a new brick school building.  The Bassetts tuned the schoolhouse into living quarters, while the original barn continued to be used to house livestock.  In 1917 neighbor, Louise Vhay, purchased the property from the Bassetts and converted the upper haymow into a large living room and the lower cow stable into a dining room.

Charles C. Winningham
In 1919, Charles C. Winningham an automotive advertising executive from Detroit purchased the Basset barn-school complex and made a number of significant improvements.  Winningham was a devoted fan of Robin Hood and hung six murals by renowned artist, Paul Honore, depicting the exploits of Robin and his merry men.  The Winningham House soon came to be known as Robin Hood’s Barn.  Immediately following WWII (when housing was in short supply) Robin Hood’s Barn was partitioned into five (5) apartments.  After Winningham died in 1954 his wife, Lucille, and daughter, Gail, continued to live in the large house for another seven years. 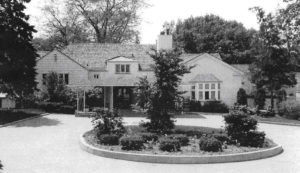 The Village Club
The Village (Women’s) Club (TVC), founded in Birmingham in 1956, initially met in rented facilities.  In 1961 the members decided to find permanent quarters.  When they learned that Lucille Winningham was interested in selling 190 E. Long Lake Rd. (Robin Hood’s Barn) they chose this very historic building with its 6.8 acres and renovated it to meet the Club’s needs.  Over the years, TVC has continued to make many beautiful and useful additions and upgrades.  One of the recent and most impressive of these is the large outdoor terrace adjacent to the main dining room.  However, they have retained much of the original Basset barn structure which can be seen when one enters the club.  The old schoolhouse now contains the office area.

One of the most interesting features of TVC is that it is laid out in five (5) different levels with several areas suitable for large events such as wedding receptions.  The gardens and extensive terraced grounds are another feature of TVC that make it a true gem in Bloomfield Hills.