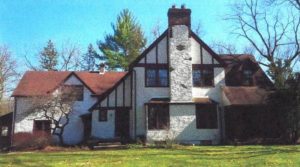 The Roosevelt house has changed little over the years.

In 1915 developer Judson Bradway platted the large Bloomfield Estates subdivision north of Big Beaver Road.  One of the first homes built in the subdivision is on the southwest corner of the intersection of Charing Cross Road and Kensington Road on 4 acres overlooking the former Grand Trunk railroad commuter parking lot. The English Tudor house was designed by architect Marcus R. Burrowes who designed the Cranbrook Greek Theater, Birmingham City Hall and the Baldwin library. A detailed landscape plan was done by T. Glenn Phillips and implemented in 1924.

The seven pages of architect’s plans and the framed watercolor landscape plan have been digitized and can be viewed on the website of the Bloomfield Historical Society.  Property ownership records indicate that Bradway and his wife Florence may have lived in the house in its early years.  It is certain that from 1935 to 1941 Dorothy Kemp Roosevelt, with her three daughters, rented the house. Dorothy was the wife of G. Hall Roosevelt, brother of Eleanor Roosevelt and cousin of Franklin Roosevelt. Dorothy was also a descendant of the first R.L. Polk.
Among the many fond memories of growing up there Dorothy’s daughter Janet remembers a night in October, 1940, when presidential candidate Wendell Wilkie’s campaign train stopped briefly in the middle of the night at the commuter parking lot and everyone ran out to see him.

After a couple of other owners the house was bought in 1958 by Dr. Charles P. Barker and his wife Nancy, who raised four children in the house. After almost 60 years in the Barker family the house was sold in 2017 and appears to be destined to be demolished and replaced by a modern house.
To see more of the story of the Roosevelt house click here.

John Marshall is a local historian and member of the Bloomfield Historical Society.