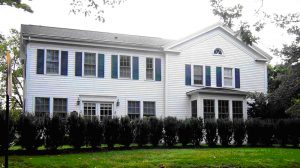 As early as the 1840s Samuel Pearsall purchased 173 acres along Franklin Rd, north of west Long Lake Rd. in Section 16 in the very middle of Bloomfield Township. Section 16 was initially reserved for public education.  The state finally allowed the land in these “education” sections to be sold to the public in the 1840s, twenty years after most of the other land purchases in the township.  The Pearsall family farmed the land until late 1893 (about 50 years) when it was purchased by Pontiac native, Thaddeus D. Seeley.

Thaddeus was 28 years old when he and wife Eva purchased the Pearsall farm and named it Shady Bank Farm. The 1900 U.S. Census notes that the Seeleys had three children plus a domestic servant and a farm hand living in the house.  Thaddeus raised cattle on the land. Some of the cattle were experimental and used by Parke, Davis and Company of Detroit.  Seeley owned the farm for only 15 years until 1908.  Seeley was prominent in Republican politics in Pontiac. He served four years (1900 – 1904 as a state representative and four more 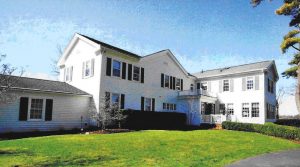 (1905 – 1908) as a state senator.  In 1912 Thaddeus did a great service to Oakland County when he edited and published the two-volume History of Oakland County, Michigan.  In 1920 – 1923 Thaddeus served as the mayor of Pontiac.  Then in 1923 Governor Grossbeck enlisted him to handle the purchase of the right of way land for the widening of Woodward Avenue and the related relocation of the GTWRR R.O.W. This project took close to ten years.  Thad Seeley (as he was known) died in 1936 at the age of 68.  He is buried in a prominent grave in historic Oak Hill Cemetery in Pontiac.

The next to own the property was Sidney D. Waldon, vice president of the Packard Motor Car Co. and later the Cadillac Car Co.  He bought Shady Bank Farm in 1908 and owned it until 1937, almost 30 years.  In the early years Waldon may have used the Farm as a summer home. However, in 1927 he built a magnificent estate a few miles east of Clarkston on Waldon Road, which he named Pine Knob.  It is still a beautiful and popular event venue today

Several additional individuals have owned the property between 1937 and today.