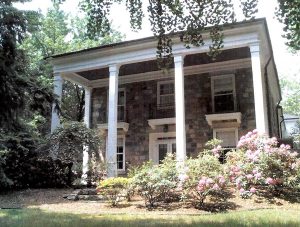 John and Polly Vaughan came to southeast Michigan from Pennsylvania and purchased 320 acres of land in Bloomfield Township in 1828. They built their homestead on the west side of what is now Lahser Rd. near the point where Vaughan Rd. meets Lahser. The Vaughans had ten (10) children. Their first house was a frame structure. Both Polly and John Vaughan died by 1837. In 1839 their son Abraham enlarged the house with the distinctive fieldstone addition to the front of the house. Vaughan Road which runs diagonally from the Vaughan house to near the intersection of Long Lake Rd. and Woodward is on the earliest township maps and was likely a wagon route from the Vaughan farm to Bloomfield Center and the train line that came through about 1845.

Following the death of Abraham in 1896, his son Clark and then his son Perry A. Vaughan owned the house. In 1921 the Vaughan Family sold their farm to Judson Bradway who platted it in to the subdivision known today as Chelmsleigh. The Vaughan house remained separate from the subdivision on its independent 9.7 acre parcel. (Perry Vaughan served as the Supervisor of Bloomfield Township for 20 years, from 1931 until 1951.) 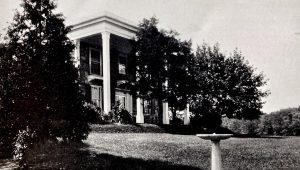 James Vernor, Jr. purchased the Vaughan house in 1924 and named it Stonecrest. James was the son of the founder of the Vernors Ginger Ale Company. He his wife, Grayce, made several additions to the House during the 17 years he and his family lived there, include the most visible Southern Colonial façade. Vernor sold the house in 1941 and relocated to another house just to the west.

There was a succession of 6 or 7 owners of Stonecrest from 1941 through 1997 when it was purchased by Gunnar and Diane Wilmot. The Wilmots owned the house, now on a 3.2 acre parcel, for only 6 years, but made many renovations and improvements. In 2001 it was presented by the Detroit Historical Society and the American Society of Interior Designers as their Designer Showhouse.

The current owners purchased Stonecrest from the Wilmots in 2003. In the 15 years of their ownership it has been carefully restored and enhanced.