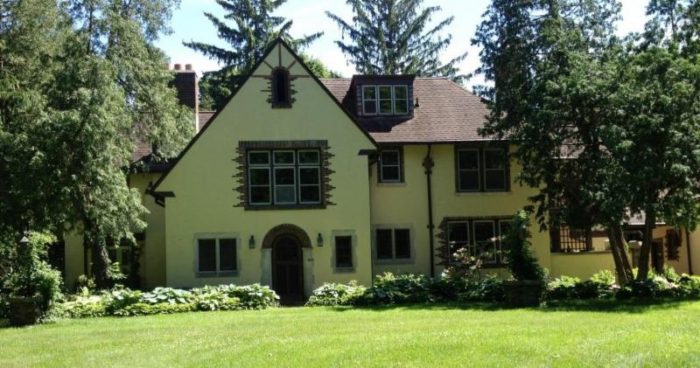 In 1916 Judson Bradway platted Trowbridge Farms, his second large subdivision in the Bloomfield area. He immediately laid out the gravel roads with concrete gutters and storm sewers. When the City of Bloomfield Hills was incorporated in 1932 it became part of the City. About this same time the relocation of the GTWRR R.O.W. cut right through the east side of Trowbridge Farms eliminating several of the lots.

In 1925 Thomas W. Taliaferro (age 62) built the first house in Trowbridge Farms on 3.7 acre, Lot #31. It is an English Tudor house containing 4,900 sq. ft. on three floors, plus a full basement. Above the 3 ½ car garage connected to the house by a breezeway are living quarters for servants. While researching the history of her house for inclusion in the NRHP, current owner, was delighted to find the blueprints by architects, Mildner & Eisner.

Thomas was the long time president of the Hammond – Standish Meat packing Co. He was one of the founding members of the BOHC in 1917 and also a member of the Bloomfield Hills City Charter Commission in 1932. For a number of years the Taliaferros actually identified their house as “Trowbridge Farms”, the name of the subdivision. 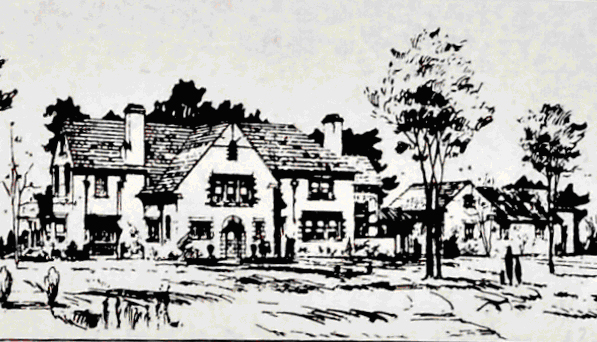 Thomas and his wife, Margaret, raised three girls. Twins, Mary and Elizabeth, were born in February 1889, to Thomas’ brother, Frank, whose wife, Mary died six days after their birth. Thomas and Margaret raised the twins as their own. Another girl, Josephine, was born much later, in 1910. Twin, Elizabeth, was married in 1921 and had four children. Mary, tragically, died in August 1934 at age 45 in a tragic horseback riding accident along Adams Rd. near Westview Rd. After Elizabeth’s husband died in 1935, she and her four children moved in with her father Thomas, who died a few years later in 1940.

From 1941 through 1944 the Taliaferro House was owned by the Children’s Fund of Michigan and is rumored to have been operated during that time as a school for girls. There have been three additional owners prior to the present owner who bought it 44 years ago.

The Taliaferro House is included on the National Register of Historic places. The House today looks very much same as it did when it was built 93 years ago. The stone garden landscaping to the south of the house is well maintained and an interesting feature of the property.