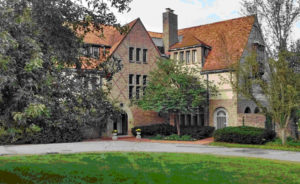 The 1927 house at 700 N. Cranbrook Rd. may be the only house in the Bloomfield Area that has had only a single owner during its 90+ years of existence.

George G. and Ellen Scripps Booth are known for the creation of the Cranbrook Educational Community. They had five children all born in Detroit prior to the purchase of their large track of property in Bloomfield. Their fourth child, born in 1898, was architect Henry Scripps Booth. George and Ellen Booth funded the construction of the first houses of each of their children. Henry married Carolyn Ellen Farr in 1924. They chose a 4.6 acre site right across Cranbrook Road from George and Ellen’s palatial Cranbrook House. The property had formerly been part of the George Brady estate that Judson Bradway had just platted into one of his original development – Brady Lane. Henry and Carolyn chose Lot No. 11, which had an interesting terrain and even had a branch of the Rouge River flowing through it. 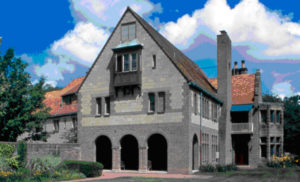 In 1925, Henry (along with then partner Robert Swanson) designed his house which was completed in 1927. The house is an interesting blend of several architectural types – French country, formal British, and a touch of Italian. Henry and Carolyn named their house – Thornlea. Henry and Ellen raised their five children in this fine house and lived there the rest of their lives. Carolyn died in 1984 and Henry in 1988 at age 90 year.

In addition to their grand residence, Henry in 1937 also built another substantial building just a short distance away on the north side of the property at the corner of Cranbrook Rd. and Brady Lane. He used this as his Studio where he pursued his artistic and architectural projects. In his later years Henry turned this Studio into a type of archives for Cranbrook historical collection. Upon his death in 1988 Henry bequeathed both his residence and his studio to Cranbrook. Shortly thereafter Thornlea Studio was converted into the Cranbrook Archives and served as such until 2011 when the Archives was relocated to the lower level of the Cranbrook Art Museum.

After Henry’s death, Thornlea served for many years as a type of guest house for prominent visitors to Cranbrook. It no longer is used in this way, but is rented out from time to time for weddings, meetings and other group events.