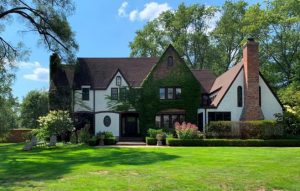 In 1926 Leroy and Alice Brown built one of the first half dozen houses in the subdivision on the corner of Strathmore and Brookdale Roads. As many of the houses were in this area in the 1920’s it was an English Tudor style. The house address was 195 Strathmore Rd. until about 2000, when it was changed to 5090 Brookdale Rd. The Browns lived in the house for about 10 years.

The next owner was a C.K. Chapin and then a few years later, in 1940, it became the jointly owned property of William D. Kilpatrick and Edw. K. and Lucia Martin. In the city directory Martin is listed as manager of Standard Steel Spring Co. and Wm. Kilpatrick’s profession is noted as “Christian Science Practitioner”. A Free Press article dated 1944 also describes Kilpatrick as a member Lecture Board of the Christian Science Mother Church. It may have been this ownership by a CS practitioner that lead to the vague rumor that it had once been a “hospital.”

In 1947 the house was purchased by Francis I. and Thelma LeVeque their daughter Carol and son Francis G. Father, Francis I. LeVeque was the secretary – treasurer of Anchor Steel Co., Det.; son, Francis G., became the chief of oral medicine and surgery at Harper Hospital in the 1990s. Daughter Carol became the advertising manager for Automotive News. 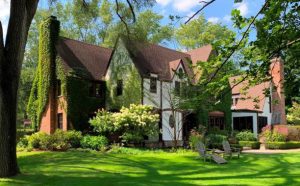 The next owner of the house in 1954 was Mary Trambush, who along with her two daughters, Mary T. and Frances owned and ran The Farm House, a very popular restaurant on 9 Mile Rd. in Hazel Park, The restaurant opened in 1935. Mother Mary died in 1984 and her two daughters continued to operate it until it was closed 1993 after 38 years in operation. The Trambush sisters continued living in the house at 195 Strathmore Rd. until Frances died in 1989 and Mary T. in 1999 at age 83 years. The house was sold by the Trambush estate following Mary’s death, the Trambush family having owned the house for 46 years.

The present owners, Richard and Rebecca Sorensen; he is a CFO and she a financial advisor. They raised their two daughters in the house and have now been in it for over 20 years. They have lovingly restored it, added on to it, and even changed the east elevation to become the front of the house which has been re-addressed to be 5090 Brookdale Rd. It September 2007 the House was the featured stop in the “Birmingham House Tour.” The Free Press covered it in a large spread with many photographs.