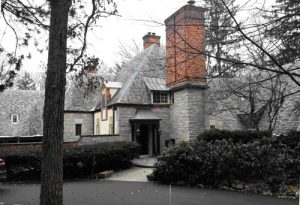 In 1926, Harold J. Klingler, his wife Phyllis and their three children arrived in Birmingham where they first lived on Pilgrim Rd. Harold came as assistant Sales Manager for the Chevrolet Division.  In 1929, Harold purchased 4.5 acres on N. Cranbrook Rd. from R. W. Years who had a few years earlier built his house on the other half of his parcel. This property today is on the east side of Cranbrook Rd. just south of the Congregational Church of Birmingham.  In 1929, the Klinglers commissioned prominent Birmingham – Bloomfield architect, Wallace Frost, to design a fine Tudor style mansion for them. George W. Auch Co. built the house. They named their estate Uphome, perhaps a takeoff from their neighbor Frank Bromley’s Uplands.

Harry J. Klingler held several top level GM executive positions, including 12 years as the General Manager of the Pontiac Motor Division, until his retirement in 1955. In addition to his career with GMC, Klingler served on the Bloomfield Hills City Commission for 18 years, from 1937 to 1955. He was selected to be Mayor on four different occasions. In 1956, following retirement Harry and Phyllis sold the Cranbrook Rd. House and moved to nearby, Stratford Lane. They later moved to a house on Westchester Rd. near the intersection of Adams Rd. and E. Long Lake Rd. Harry died in 1966 and Phyllis just a year later. 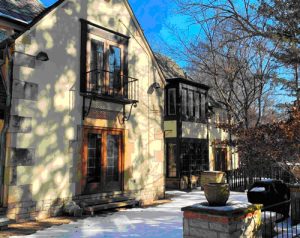 The second owners of the House were Phillip J. and Escha M. Monahan who acquired it about 1959 and lived in it for 8 or 9 years. They sold it in 1968 to Walter O. and Gwen Briggs III. They had a very large family of eight children and lived in Uphome for only about six years. Walter was the grandson of Walter O. Briggs long-time owner of the Detroit Tigers. Gilberto and Margaret Higera were the fourth owners and had the house for almost 25 years.

The current owners bought Uphome in July 2000 and over the last almost 20 years have lovingly restored and maintained it. They also take great pleasure living directly across from the original 1904 north entrance to the Booth property (now Cranbrook – Kingswood) and regularly take long walks on the property. On one special occasion several years ago the mansion was pressed into service to serve as the venue for a formal dinner for 30 visiting members of the international Walpole Society who were originally scheduled to gather for their annual dinner at Cranbrook which had suffered a power failure just days before the scheduled event.