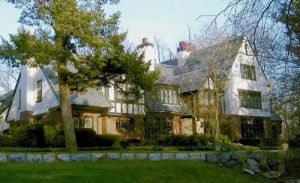 At the very beginning of the 20th century Charles Stinchfield owned a huge parcel (290 acres) of land between E. Long Lake Rd. and Hickory Grove Rd. west of Opdyke Rd. to Woodward Ave. In 1915 Stinchfield sold 8.3 acres to Matthew B. and Ellen R. Whittlesey. This parcel was on the south side of Hickory Grove Rd.  In 1919 the Whittleseys built a larger English Revival style estate house with four car garage and a commercial size greenhouse. The buildings were designed by prominent Michigan architect, Marcus Burrowes. Their estate was named “Eight Acres”. Between 1920 and 1925 the Whittleseys acquired another 5.8 acres bringing the total size to 14.1 acres. The main house contains 8 bedrooms, 5 full baths and 5 fireplaces. The 1930 US Census lists the Wittleseys family: five (5) sons, one daughter and four (4) live-in servants (chauffeur, cook, house keeper and maid). Matthew was a partner in the brokerage firm of Whittlesey – McLean. They owned the estate for 29 years.

Al and Julia Bergel purchased the estate in 1944. They owned and operated the popular Susie-Q Restaurant on the east side of Woodward just north of 12 mile for 43 years. The Susie-Q opened in 1942 with seating for 30 and had grown to accommodate seating for 240 when it closed in 1985. While living on Hickory Grove Rd. the Bergels constructed a large swimming pool complex on the property in the med-1960s. In 1986, after owning the property for 43 years, Julia sold all but a 1.5 acre parcel on which the house, garage and green house are situated to Robertson Brothers Company who constructed the 41 unit condominium complex that they named Hickory Glen and opened in the late 1980s.

Then, within a year or so Julia, also sold the 1.5 acres with the buildings to Charles and Lois Blair. During their tenure the Blairs totally restored/renovated the main house, carriage house, and greenhouse. This included the installation of five new boilers and furnaces, new electrical and plumbing and complete renovations of kitchen and bathrooms

After owning the estate house for 29 years the Blairs sold it to the current owner in 2016.