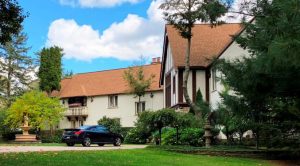 The Crawford Family – In 1830 John Crawford of Orange County, New York purchased 160 acres of land in section 20 and another 40 acres in Section 19 of Bloomfield Township. This land was on both sides of what is now Franklin Road between Lone Pine Rd. and Quarton Rd. John and two sons and a daughter built a large house and barn plus out buildings on the east side of Franklin and farmed the property until 1911. Their property contained two lakes – Crawford (now Chalmers) Lake and the much smaller Mirror Lake. The Crawfords are all buried in Pine Lake Cemetery on Middlebelt Rd.

Hugh Chalmers came to Detroit in 1907 as a young man from Dayton, Ohio, where he had been the chairman of the National Cash Register Co. By 1911 Chalmers had formed his own automobile manufacturing Co. named the Chalmers Motor Company. He and his wife Frances purchased the 80 year old Crawford Farm in 1911 and by 1927 had built a large estate house in place of the Crawford Farmhouse. The called their estate, Woodcrest Farms. At about the same time Chalmers subdivided the estate into residential building lots keeping a large 13 acre parcel separate where his new estate house stood. Chalmers died suddenly from a heart attack in 1932 at the young age of 58 years. His wife Frances stayed on the estate for a few short years and then sold it in 1938. 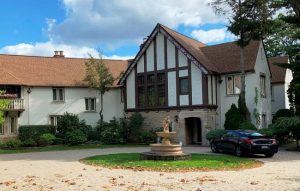 David and Georgia Broderick became the new owners of the estate house and its large 13 acre parcel. David was the owner of the prominent D.F. Broderick Insurance Co. They renamed the estate GeoDa Farms combining the first few letters of each of their names. However, the subdivision of which it was part retained the name Woodcrest Farms. Georgia, especially, was very prominent in the social life of the Bloomfield area. When David became very ill in 1951, the Brodericks moved to Florida. They sold GeoDa Farms to a developer who, in 1955, subdivided the 13 acres in to 9 new building lots. With the main house on one lot and the carriage House and Pool on two separate lots.

Thomas and Laurette Driesbach (of Driesbach and Sons Cadillac) purchased the estate house in 1964 and lived there with their eight (8) children for 26 years.

The present owners purchased the Chalmers Estate house and five of the nine lots (7.5 acres) in 1991 having lived there now for over 30 years. The house is of English Tudor design.  Although nothing like the original 160 acres that Chalmers started with, the 7.5 acre parcel is large by today’s standards. And the current owners have retained lake frontage.